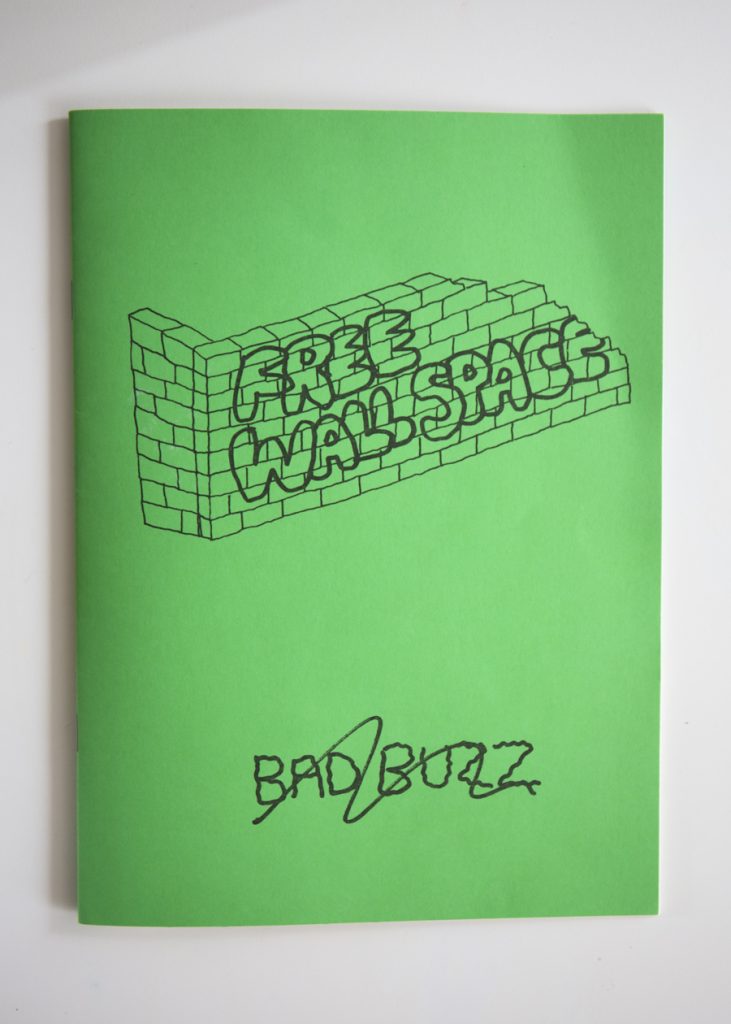 I recently got sent Free Wall Space which is a newly released zine showing work by the Barcelona based Bad Buzz. The publication is the result of two years of the artist ‘pulling his eyes out everyday’ sketching to achieve his own style. In fact eyeballs do seem to be a theme running through his work and feature a lot here! The rest of the content is made up of a mixture of sketches, photos of scrappy graffiti, and weird characters – with eyes. 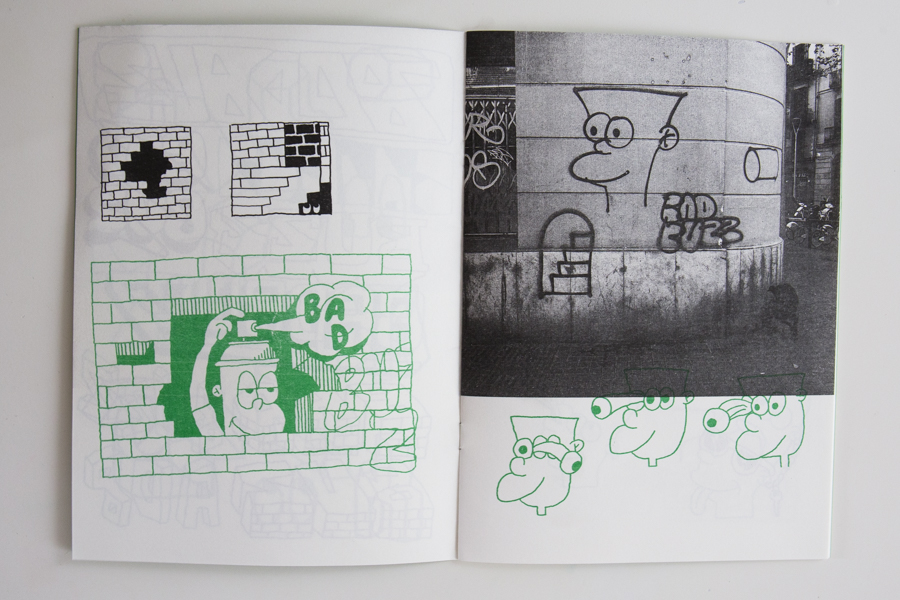 Before going on with the content I’ll start with the zine itself which has been printed using Risograph. This is one of those words I’ll read, often alongside ‘limited edition’, that I don’t actually have a clue what it means. So, after a quick internet search, it turns out that Risograph is basically a cheap but good quality way of printing. It’s a bit like mechanical silk screen printing with layers of single colours which can be printed over each other. This method works well with Free Wall Space as the pictures don’t need multiple colours (in this case black and green) and aesthetically it goes well with the photo content. The zine ends up looking nicely produced yet it still has a DIY feel to it.

The style showcased in Free Wall Space could be broadly described as ‘Trashgraff’ but I think it could be more accurate to say it’s irreverent. There’s no clean lines, no conservative letter forms, and even the graff is slapped up on rubbish bins. It’s all done in what looks like a carefree way but it’s actually well thought out. The zines title is a reference to organisations that require approval to use their ‘free’ wall space and so end up restricting the expression that graffiti allows. 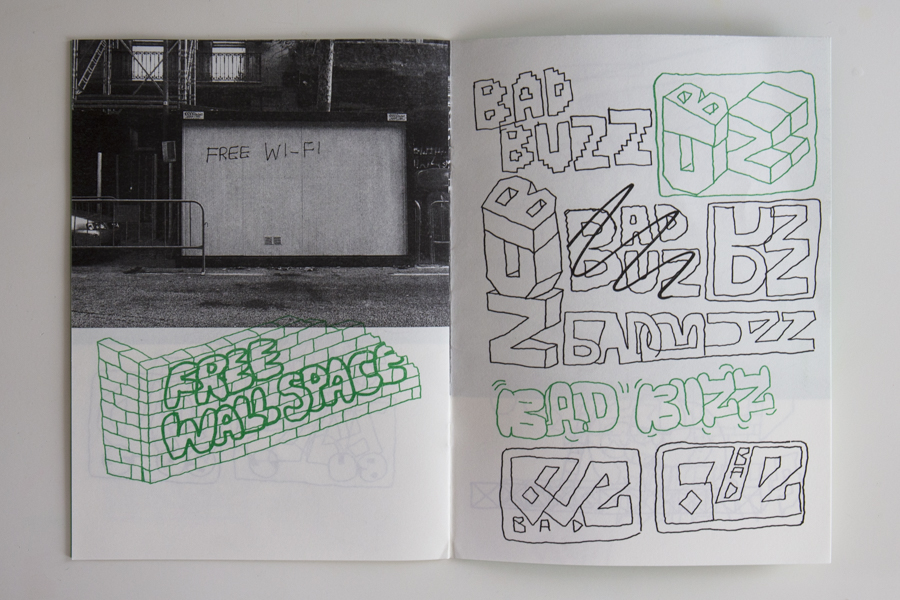 Free Wall Space constantly references popular culture. Company branding is appropriated, cartoon characters are given a makeover, and ‘free wi-fi’ is offered. I took the last one as some sort of comparison to the free availability of information on walls with the increasing availability of digital information. Bad Buzz uses the internet as a way of getting his stuff out there in a similar way to his walls which are another convenient form of exposure. More generally the zine reminded me how much graffiti can mimic or challenge popular culture. Bad Buzz cites some of his influences as cartoons, skateboarding and a bit of punk. Although graff is usually seen as an element of hip hop this graffiti reflects an alternative vein. Here the appearance of Kilroy points to a history of graffiti that extends from before the emergence of hip hop and beyond it too. 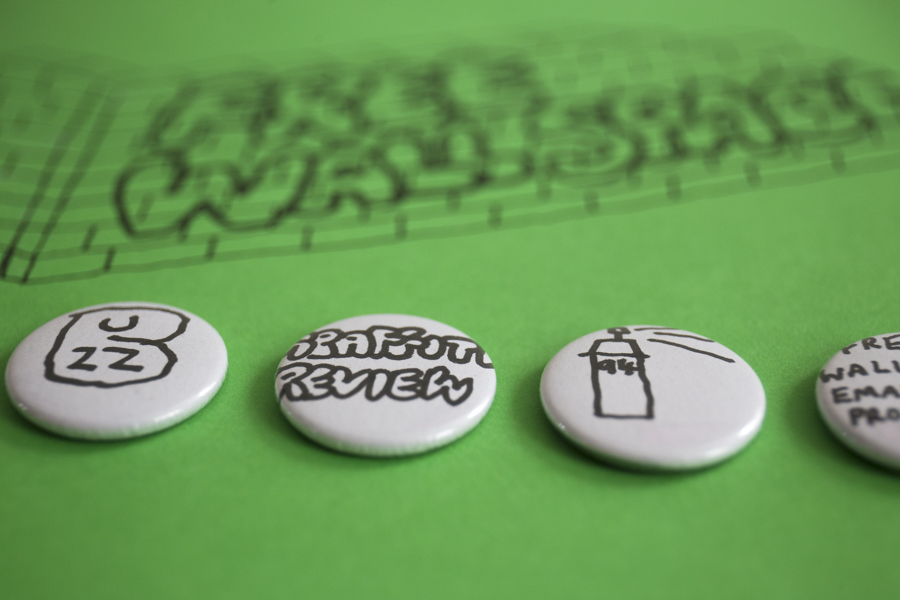 Bad Buzz’s work may not be to everyones taste but I think he’s successfully making something different. From an escalator with legs and a face, to stairways disappearing into walls, or cartoon characters turned into other objects with multiple eyes, Free Wall Space is imaginative and amusing. The cool photos of graffiti or the simplistic 3D shapes make the zine a bit unusual and worth looking out for.