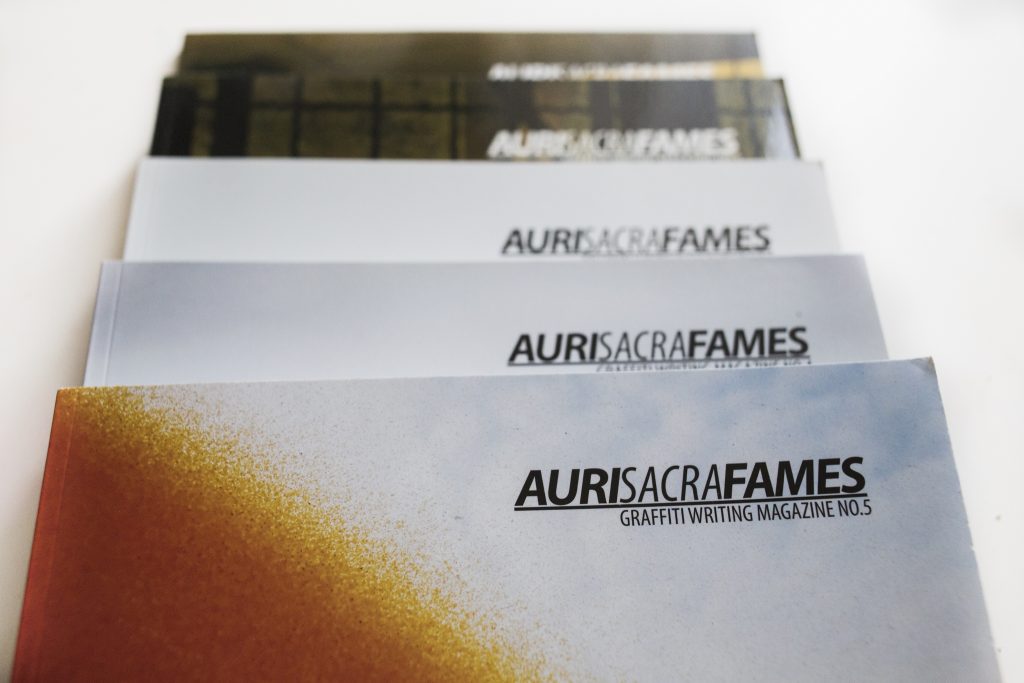 Last month Berlin’s Auri Sacra Fames mag celebrated its fifth anniversary! To mark the occasion we did an interview starting with how the magazine first began and the ethic behind it.

“The main idea behind the magazine was to give an high quality alternative to Streetfiles in times when other Berlin magazines were dead or paused. My former magazine-partner and me did shoot a lot of photos at this time (2008-2012) but we didn’t want to upload the really good ones, so we kept them back. I was helping the Streetfiles-team at that time as an admin to accept and rate the users uploads. The growing mass of stuff which came online at that point was a blast! I remember 1000+ photos which had to be accepted on weekdays, some more at the weekend. But somehow the attention you paid to graffiti on this platform changed. The average time I would spend on looking at trains, hall-pieces, tags, etc. was reduced to a few seconds. Open, look, bookmark/love/hate, skip to the next one… I grew up with magazines like Overkill, which I did not just read, I studied. The pieces, the colour schemes, the tags and so on. It was the only access to graffiti-photos I had for several months. So in a way Streetfiles, later on myspace, tumblr and facebook, and nowadays instagram, is the real ‘overkill’, not INKA’s legendary magazine.

Through Streetfiles you had a wider spread focus on what was going on in Berlin. There was stuff I’ve never seen before. ‘Spotters’ really scanned their neighbourhoods and would load up the results. Especially trainspotting also became a big topic. We tried to include this broader view on the scene in our first issue. In my opinion we were the first Berlin graffiti magazine which didn’t pay attention if the content was from ‘real’ Berliners, from guys who just moved here or from tourists who made an interrail-stop in our town. As lovers of graffiti, we were not interested in the writers so much, more in the stuff they painted. Why should I feature stuff only from people who I know personally? That does not make any sense if you document the scene.”

From the very first issue Auri Sacra Fames has emphasised good quality photography to display its subject properly. Considering just how much content is packed into each issue this consistent quality is an impressive feat.

“The editing of the last issues was a result of scanning the scene for the most active and most interesting people in town in the respective years. Our approach was to give an objective insight in the chapters on tags, S-Bahn, U-Bahn, etc. In the specials you can find people who stand out from the crowd whether through quality or quantity. Our personal taste has most often nothing to do with the stuff we show in the magazine. Who the hell is interested in the stuff I like?

I have to make one thing clear at this point; 90% of the stuff people send in to be printed is crap concerning the photo quality. Come on, it’s 2017. If you want to be in a magazine go out and take shots of your trains and don’t steal them from other peoples tumblrs… And if we print your stuff, why do you upload it on your instagram account afterwards? To keep a level of high quality photos it’s necessary to have a network of trainspotting-nerds around you. Without their help the magazine would not exist. Big thanks to the team!” 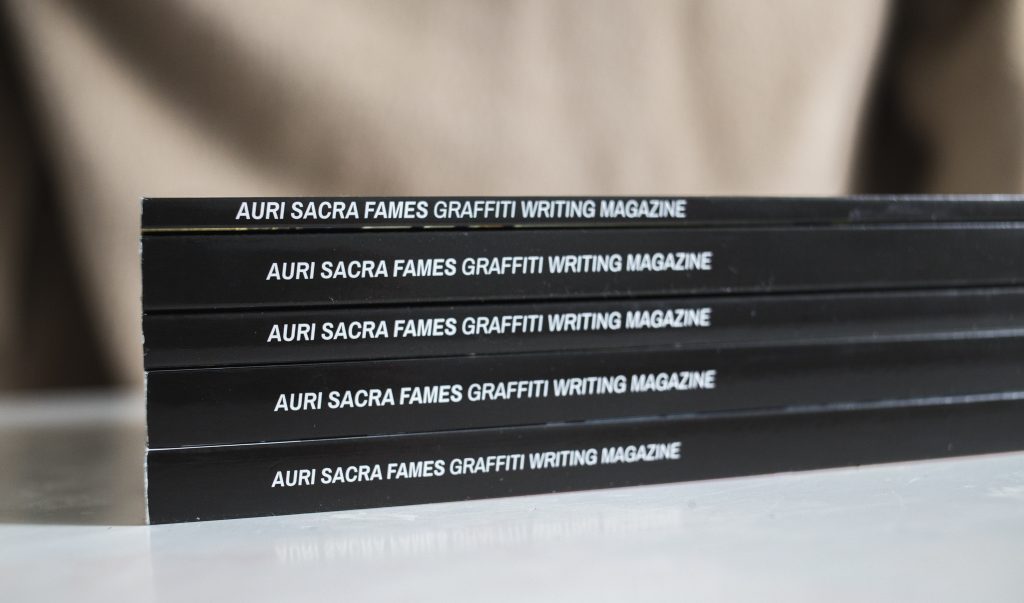 Aside from the photographic content the magazine always features interesting texts. These are often in an unusual or sometimes even poetic style.

“Especially in our latest issue the texts by CREAM and the 20 years DRM special did include in a way poetic characteristics and elements. In the past we allowed our specials to present themselves in whatever way they had in mind. So CREAM’s second attempt to write down fitting words to his works ended up as three poems on each chapter of his feature. The ongoing recurrences in the DRM special express the repetitive constant routine of the crew in the first 10 years of their existence. It’s a kind of metaphorical link to the actions which made them trainwriting-legends in the late 1990’s and 2000’s. It may come out a bit strange in the first read, but we’re happy to have both examples the way they are. There have been too many boring texts by writers and crews in the past, right?”

Another overall element of the mag is its exclusive representation of the Berlin scene. Unlike other magazines, which often have a national or even global reach, the aim for Auri Sacra Fames is to honestly document all the elements of Berlin graff.

“The advantage of having a Berlin-only focus is that the idea of an objective documentation is way easier to achieve than, for example, if you do a Rhein-Main-area magazine. If I look at other magazines, which all have the little disclaimer at the end saying that they document the scene, I can’t keep from laughing. I always ask myself; where is the rest? If you ever visited Berlin you can’t ignore rooftops from MONTE 75, tags from MREK or from GEMA and big street bombings from DIRTY. But have they ever been featured in magazines? No! What relevance has a hall-of-fame-writer whose stuff you’ve never even seen in real life? If you really try to document graffiti in Berlin you just can’t leave stuff out you don’t like. I admit that with Auri Sacra Fames we’re not anywhere close to that aim but way closer than the rest!” 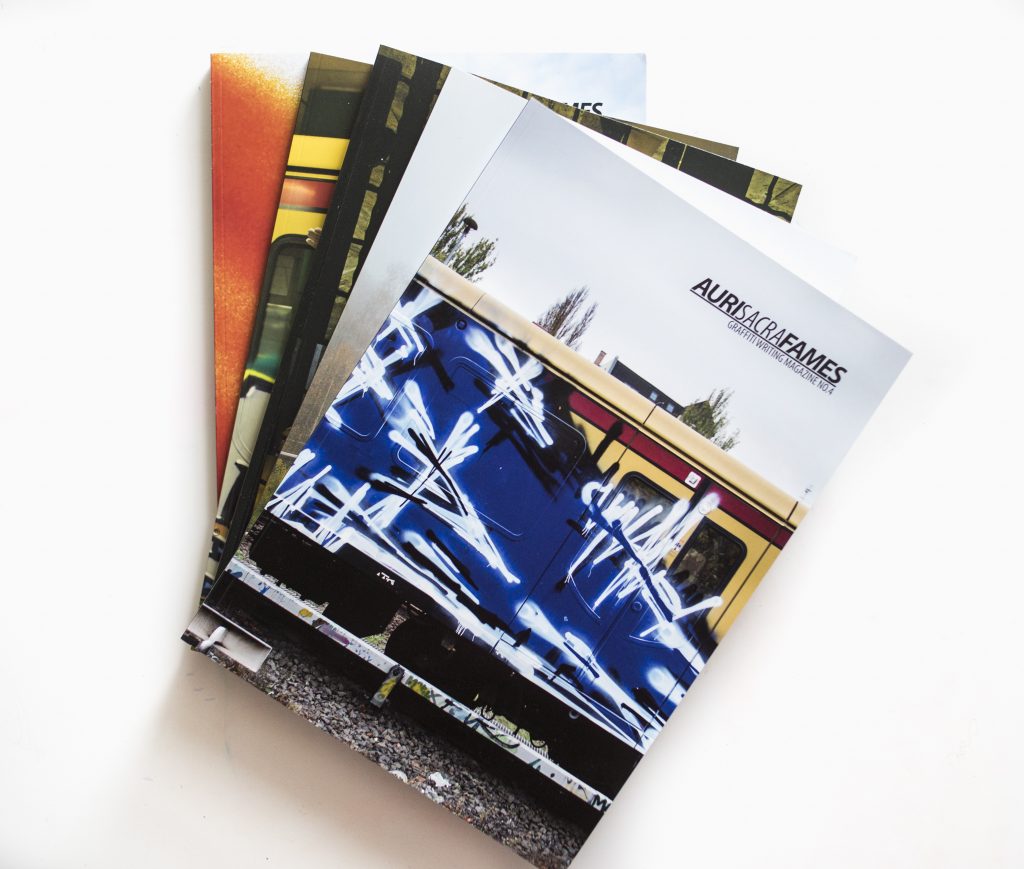 Every issue of the magazine to date has had a different theme. Ideas are already taking shape for the next edition.

“In the past the idea we had in mind when planning specials in the magazine was sometimes very different from the final outcome. Maybe we can work on that specific issue for our №6 which will be released in 2018.”