by T_C
No Comments on Écrivez partout ! 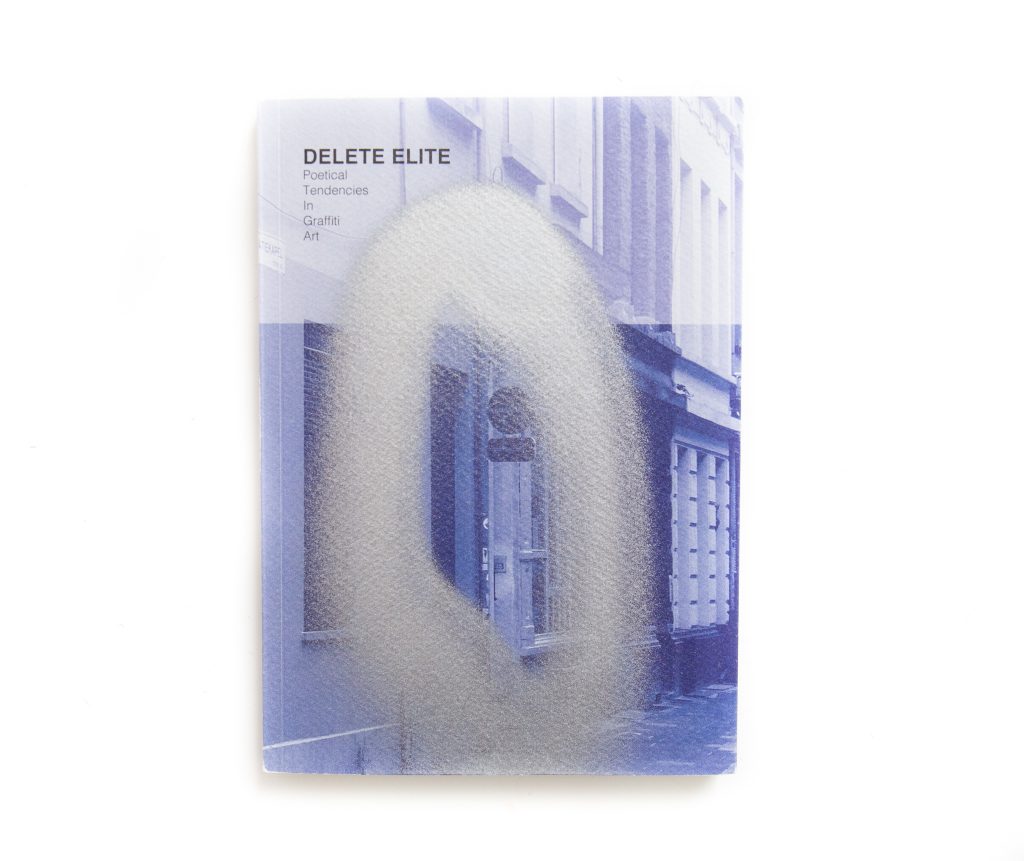 Delete Elite by Ben Brohanszky is my new favourite book! Published just last year the title, taken from off the street, is intended as a statement. The book is pitched as a study of ‘conceptual graffiti’. It contains the stuff that doesn’t neatly fit within the street-art/graffiti binary. Instead it is an esoteric meander that takes the reader from the earliest roots of modern graffiti to its contemporary manifestations. From the Provo movement through to Néma this is a tour of wall writing on the boundary of the conventional graffiti movement. The whole book is meticulously referenced and footnoted throughout but also has a casual style which includes line drawings done by the author with his eyes closed.

The introduction sets out how the disparate examples of graffiti will be brought together through the prism of ‘poetical elements’. Brohanszky declares that “Writers write” and seems to distance his narrative from the idea of graffiti as a universal tendency beginning with cave paintings. He even prefaces the intro with various quotes challenging the term ‘graffiti’ itself. The book is split into eight chapters and, following the introduction, jumps into the early threads of graffiti history. Actually this isn’t quite correct; the reader finds themself wading straight into a fascinating tangent of footnotes. So a short paragraph on Kilroy is accompanied by five pages of dialogue, illustrations and poems. Soon enough Brohanszky’s discussing Provo graffiti alongside the wall writing of the Situationists up to ‘68. Smuggled into another six pages of footnotes are hobos, latrinalia, and punx. The author covers such examples as they are not so distant from the current motivations and attitudes of graffiti production today. 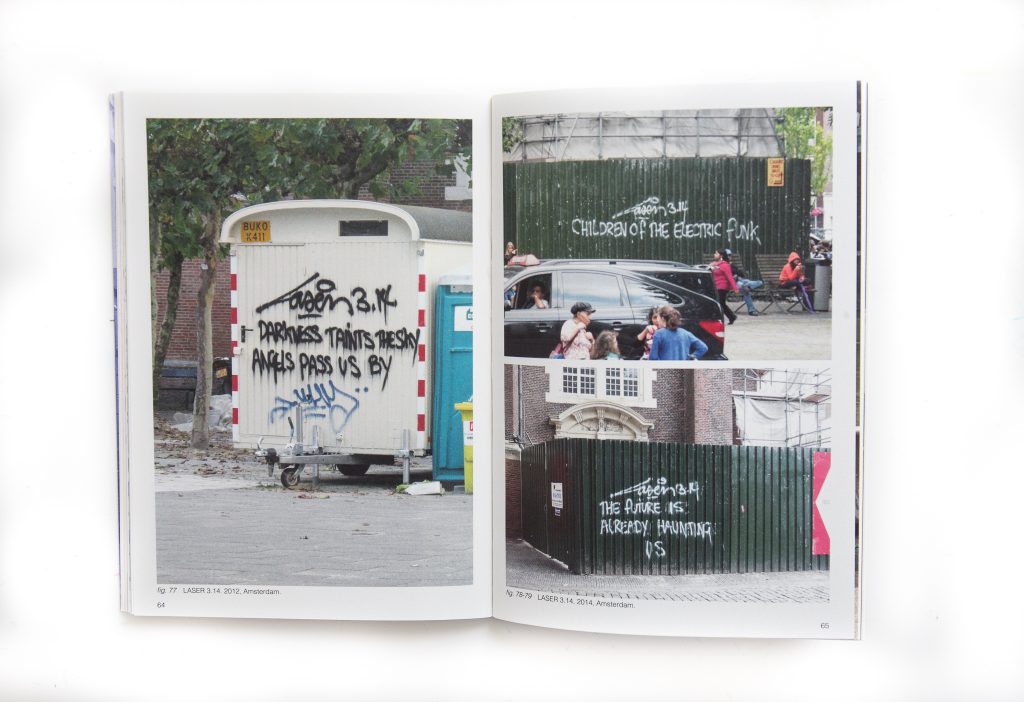 The graffiti in Delete Elite is couched in terms of its ‘poetry’ but is also described as a weapon. The wall writing of ‘60s and ‘70s New York is politicised because it was produced at a time when “high culture legitimized the racist exclusion of contemporary youth-culture”. The content of this style of graffiti is rarely overtly political itself yet often contains messages. Here Brohanszky highlights the sort of phrases hit up alongside tags or in the margins of a panel. These messages are then linked to the more obvious example of SAMO©. Basquiat, however, is given fairly short shrift, of more interest is the site-specific work of his contemporary Endre Tót. SKKI© is a more recent writer who has abandoned graffiti pieces for the texts he used to put up around them. He points out that before the Situationists “many proletarians used to write critical/political messages on walls with chalk or paint”.

It’s these later sections of the book where the poetic aspect becomes more obvious. The work of Revs is held up as a writer who’s not just painting but producing literature on walls. Meanwhile the book Calyba, by Joachim Spurloser and Stefan Wartenberg, goes in the opposite direction by taking graffiti off the walls and putting it into poetry on paper. Here the poetical tendencies are more explicit but overall poetry is a concept used to get back to the idea of graffiti as writing. Brohanszky explained to me that the idea is “an alternative to how graffiti was canonized in the art world and mostly considered as painting. I think about graffiti as intermedia art and my book provides an alternative interpretation.” 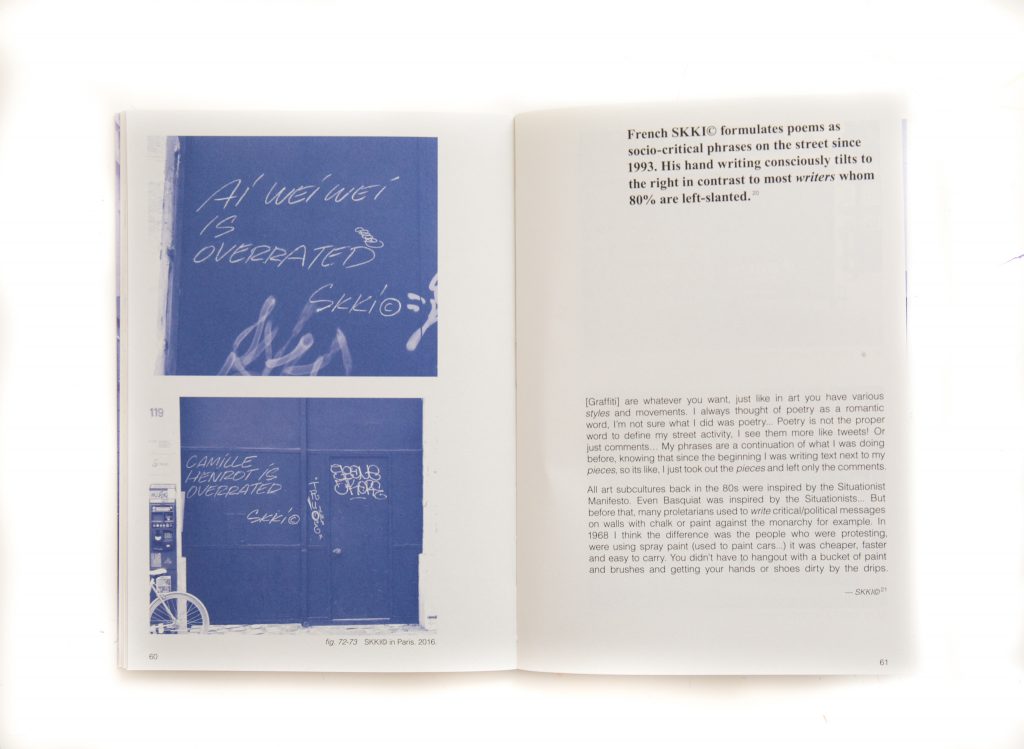 Delite Elite is just a great book. Every page has something interesting to describe and, unusually for an academic book, has plenty of illustrations to complement the text. The author has a wide knowledge of his subject, making interesting links, and keeping this a book about graffiti rather than an obscure academic exercise. The publication is the result of a research project on ‘conceptual graffiti’ and as such the bulk of copies printed went straight out to libraries and other educational institutions. So unfortunately this gem is a bit hard to find! However Brohanszky regularly releases his own specialist zines and is currently working on his next project cataloguing European handstyles.