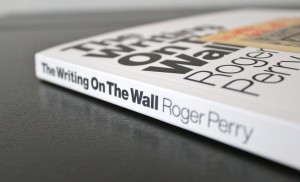 As the photographs in the book were taken in London during the mid-seventies I wasn’t expecting to see loads of wildstyle burners but I found the book fascinating nonetheless. What made the book so interesting was the thorough research done by John Stewart-Lockhart. He provides a great forward in which he not only outlines a background to the original book but also to the individual images as well. He starts with a brief discussion of the importance of the photographic record itself. He credits Brassaï with realising the importance of recording graffiti although other photographers such as OGS Crawford were taking similar pictures around the time. Perry also recognised the need to make a photographic record of the transient graffiti he saw.
Lockhart has managed to track down many of the writers of the graffiti Perry photographed and goes into detail as to what the significance of the them is. He traces much of the graffiti back to the Situationists and the formation of King Mob who were responsible for many of the slogans photographed. Taking inspiration from a variety of sources they would paint abstract statements on walls and along the tracksides around West London. Other graffiti in the book was made by Anarchists or came from the lively squatting movement of the time. Lockhart describes the social situation and counterculture of the area as well as the atmosphere of the squats which really puts the graffiti into context. 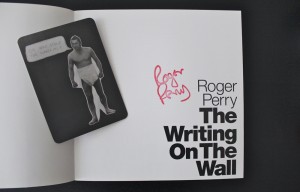 Lockhart also makes links to the modern graffiti movement. He discusses a famous piece of graffiti that was painted by King Mob on the Westway which was a message to commuters about the drudgery of work. He says the Westway has since developed a ‘particular mythical status in British graffiti culture’ and possibly the King Mob piece itself has had a lasting influence as I have seen similar messages painted by graffers along the tracksides in recent years. He also discusses the emergence of modern tags which are photographed in the book. Whilst researching the book Lockhart came across pictures of pieces by ‘Mr B’ and ‘Kix’ from 1974 which he describes as pioneering and important to the history of the graffiti movement in Britain. He finishes his forward with a picture of a current piece done by Gold Peg which he compares to the older graffiti in the book.

As well as the forward by Lockhart there is the original introduction to the book by George Melly. He is interesting to read as a contemporary view of the graffiti but he also makes some good points too. He noted that lots of the graffiti relates to Anarchism and argues that ‘graffiti is a very exact expression’ of the Anarchist position. He notes how graffiti at the time was being used by companies to advertise but he believed that if graffiti became too commercialised and mainstream it’s essence would die. This last issue is also discussed by Bill Drummond in his introduction to this edition of the book. He says that as graffiti has evolved and spawned ‘street-art’ he’s lost some of his appreciation of it. He is unable to identify with street-art in the same way he does with graffiti.

The graffiti in the book is nicely laid out with a large photo on each page. Lots of it is made up of absurd statements or poetic messages.  There are also peoples names and a few London football clubs such as Chelsea and QPR are represented. One of my favourite slogans was ‘The tigers of wrath are wiser than the horses of instruction’ on page 50. The photos often have people in or a bit of their surroundings which adds some atmosphere to the book. On page 14 there is a photo of a wall with the strange ‘cats like plain crisps’ written across it. In the foreground of the photo there is a dalmatian standing and looking toward the camera which adds a bit of humour to the statement. Apart from the bizarre there is graffiti relating to the politics of the time. Mosley, Northern Ireland and the miners strike all appear in the book. Most of the graffiti is crudely done with paintbrushes which works quite well in black and white. 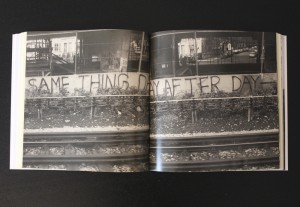