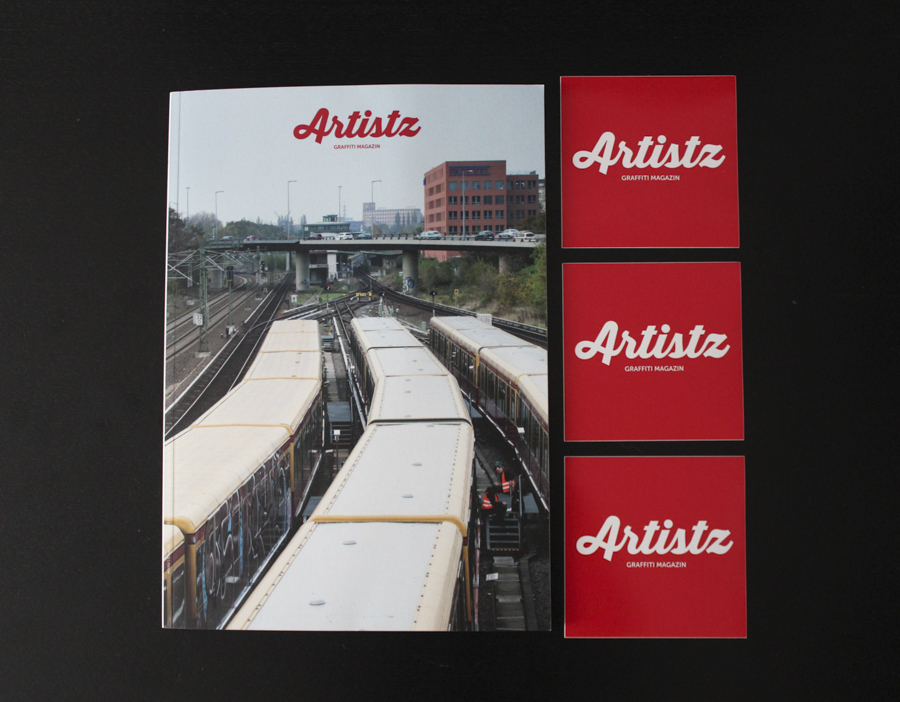 Without trying to sound like too much of a Germanophile Artistz is typical of the sort of graffiti publications from the country that are well produced, contain good quality photos of a nice size, have interesting content and generally just get the job done well. This particular German magazine focuses on transport in Berlin. It is thoughtfully laid out with photographic chapters that are split up by pages of interviews and text with English translations.

So, after an intelligently written introduction by Sekd, Artistz starts with pictures of chromes on S-Bahn trains. Then there is a sixteen page chapter showing a nice selection of black books and private photo collections. This is then followed by U-Bahns and two interviews. The first is with a graffiti photographer, the standby man, who nicely describes what he does and some of his experiences. The second is a twelve page photographic interview with a graffer called Osman. The photos are accompanied by a small bit of text but rather than a conventional Q&A interview Osman has decided to have six well chosen quotes from other writers.

After this there are a few more pages of cool U-Bahn shots and then we come to the section that I enjoyed the most. Here Igit writes the story of how he came to know an itinerant beggar. He describes a bit about his ‘homie’ and how he is now a street-reporter who documents his experiences and observations. There are a few examples of this nameless mans work which include photo’s of graffiti as well as street scenes. As Sekd points out in his introduction “links are omnipresent in every metropolis juggernaut” yet this article is pretty unique for a graffiti publication. Despite the nature of graffiti, meaning that it’s not unusual that the people doing it encounter others moving on the fringes of society, it’s rare to see any positive interaction represented.

The last passage in the magazine describes a group of friends meeting up to eat schnitzel and drink beer while they reminisce and look at photos of graffiti. Some of these photos are reproduced in the magazine too. The magazine finally ends with a few last colourful U-Bahn pieces. I’ve not actually read Artistz before and as this is the seventh issue I’ve arrived a bit late. However I definately enjoyed it and I’ll look out for it in the future. I really liked the section of chromes on the S-Bahn, the shots through the bushes on pages 64-5, and the picture of the train with the flats in the background on 59. While all the text was interesting the introduction was a particularly well written mix of humour and observation.