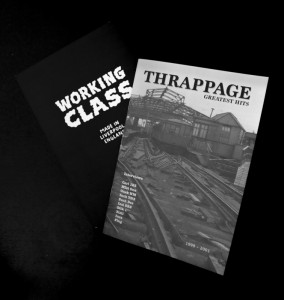 Thrappage was a zine that originally ran from 1999-2001. I’d never actually heard of it before so I was intrigued to see a new anthology has been released. Thrappage: Greatest Hits is a collection of some of the best content from the original publication. There is an intro and an outro that explain what the magazine was, how it was received, and what it lead onto.

The idea behind the magazine was to represent the graffiti scene from the North of England. The content was a cut-and-paste mixture of walls and trains accompanied by interviews with important writers of the time. The photos are all black and white. The quality of a lot of them isn’t fantastic as, the editors explain, they started out as photocopies of pictures and the originals of these have disappeared so this collection was made from copies of the magazines. However the photo content is still nice to look at and gives a feeling of the original fanzine. 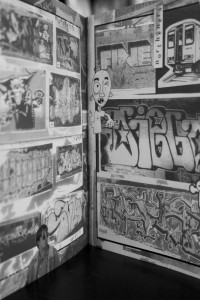 Aside from the images there are also ten interviews reproduced. They are all good to read but I enjoyed two in particular. The first of these is a nice interview with Carl 123 who describes how he first got into graffiti on a rainy day in 1987, his influences, and his letters – which he doesn’t describe as ‘soft petrol pump’ style. The second interview is with Mist 1 who also got into graffiti in the 1980’s. It was really interesting to read about the presence of the punk graffiti that Mist describes and how writing with punks and mods on buses was his first taste of graffiti before hip-hop came along. In fact punk also pops up as an influence in a later interview with Izal too. Punk in general isn’t mentioned too often, in comparison to hip-hop, but it’s undoubtedly had an influence on graffiti and it’s intriguing to read about that here.

Often graffiti magazines have small print runs and can be hard to get hold of at the time – let alone fifteen years later! So this is a really good (re)publication as it’s something that I’d probably never see otherwise. The quality of the production is good and the magazine has a strong (Northern) character that comes across nicely.