Chemistry is a Dutch graffiti magazine that comes across as quite a sophisticated publication. While there are no texts in this seventh issue the content stretches beyond purely graffiti with sections on urban exploration, some fine art, and a ‘minimal complexity’ chapter that probably wouldn’t look out of place in an architectural journal. 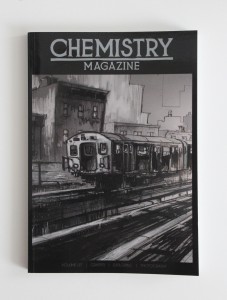 The magazine opens with a series of urban exploration photos taken by different photographers. These range from high up on skyscrapers to deep down in the Tube and inside abandoned buildings. After a few pages of this the graff starts off with thirty pages of proper Dutch steel. Lots of nice styles and colours with a few action shots. There’s also a bit of humour too with pieces dreaming of beer or being pulled by magnets.

Towards the centre of the mag is some art by CMP One. The pages are mostly pencil drawn scenes of people and trains in New York. There’s also some impressive examples of what the sketches look like once they’ve gone from paper to brick. The work presented is not conventional graffiti itself but art inspired by graffiti and it’s surrounding culture. His work is also used on the front cover of the magazine. 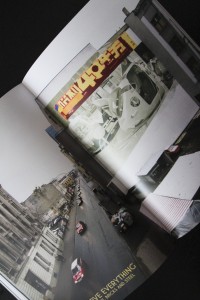 The two following sections start off with some more urban exploration photographs. These have a narrower focus than before and are mostly railway related. The second of these sections has the title minimal complexity and shows the work of Graphic Surgery. This is odd stuff to describe; it’s made up of abstract blocks of straight black and white lines and shapes. Some of it is clearly artistic work but some of the more large scale stuff looks as though it is designed to be part of the architecture of the grey concrete buildings it covers.

The magazine wraps up with a load more graff pictures. First a chapter showing ‘concrete, bricks, and steel’. This is simply a mixture of graffiti styles, from wildstyles to some street-arty stuff, on a range of surfaces; rooftops, tracksides and legal walls. Finally there’s international trains with some quality graffiti all over them.

Overall Chemistry is a nice publication to look at. There is an interesting range of content that includes lots of graffiti but also something different in other sections which sets it apart. I think I would’ve liked to have a bit of description about the work of Graphic Surgery and an introduction to CMP One. Other than that the content is of a high standard and well presented. The whole Dutch steel section was cool and I liked the wall on page 101.

Unfortunately I couldn’t find an Ⓐ in this magazine.