by T_C
No Comments on Urinals, Public Space & Murals 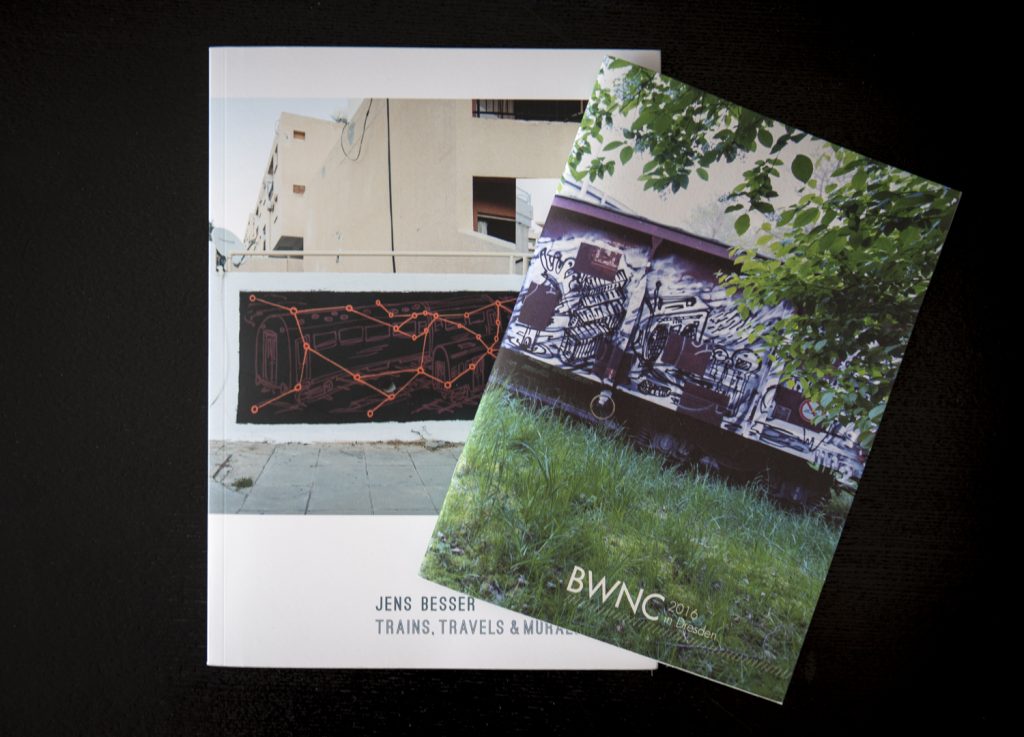 This month marks a hundred years since the artist Marcel Duchamp submitted his now famous artwork, Fountain, to an international exhibition in New York. Influenced by Dadaism his submission was simply a urinal he’d bought in a local shop. Duchamp’s surrealist questioning of institutional definitions of art has had a defining impact on modern art. Now, rather then creating something, a contemporary artist will add the label ‘art’ (and therefore implicit meaning) to anything they choose. Duchamp’s legacy has left a large portion of the public completely baffled when they enter a contemporary art gallery. Alongside its increasing commodification and institutionalisation this pretentiousness has also crept into urban art. This is what leads Pietro Rivasi, writing at the start of Trains, Travels & Murals, to declare that “we are living in the dark, medieval times of urban art.”

Having previously edited two books on muralism Jens Besser has recently released two more publications. This time the focus is on his own work with a retrospective book and a BWNC zine. The first of these, Trains, Travels & Murals, has been in the pipeline for a few years but only now has the opportunity come up for it. Through this book Besser hopes to present himself as an artist in his own right rather than just a curator. And after spending a number of years happily spraying, rollering and etching his way across walls, trains and the odd poster it’s about time this project came about. I’ll shy away from using the term ‘street-art’ as it has too many connotations that don’t really apply to Bessers work. A more appropriate label is ‘muralist’ as his works are site specific (rather than being just a branded image placed anywhere), his use of public space ranges from sanctioned to illicit, and his images don’t rely on typical techniques or predictable subjects that have become the standard trope of street art. The particular approach of this artist is outlined by Rivasi in his introductory chapter. He highlights Bessers illegal wall writing as an important factor in making his artwork relevant in contrast to many generic street artists who approach public walls “as if they were painting in a studio.” 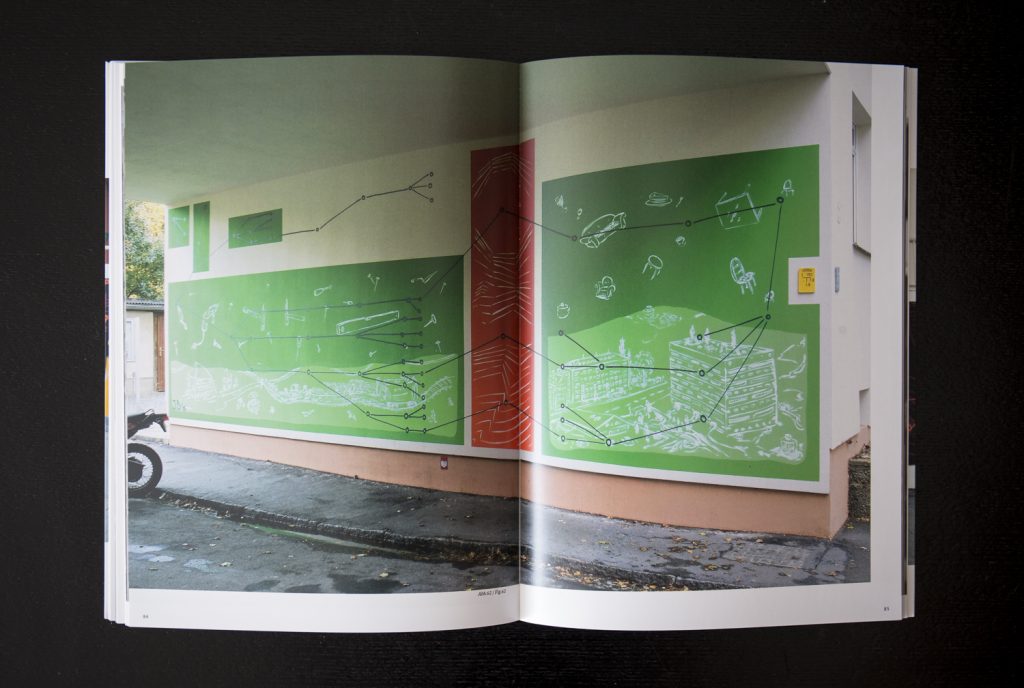 Rivasi continues by describing Bessers variation of format from photos and flyers, to chalk or engraving, and even exploring the performative element of urban art in showing videos of his works. For Besser necessity is the mother of invention he explains that “in winter time I cannot do huge walls outside, but I do continue to draw, or I start to prepare prints in my studio. Later in Spring I paste the stuff in the streets.” He might save leftover paint from jobs or elsewhere circumstance may open up new opportunities. As when on a funded trip to Bulgaria he was able to put up works in remote corners of the country. His pragmatic approach boils down to “using opportunities and combining it with public space.” While the methods and settings may change one theme he returns to is graffiti culture. Besser says “I like to work on trains or along the tracksides. That’s because of my history. During my writing period I was an active member of different bombing crews in Germany.” So it’s easy to understand how Rivasi interprets the ubiquitous network of lines running through Bessers murals as railways. 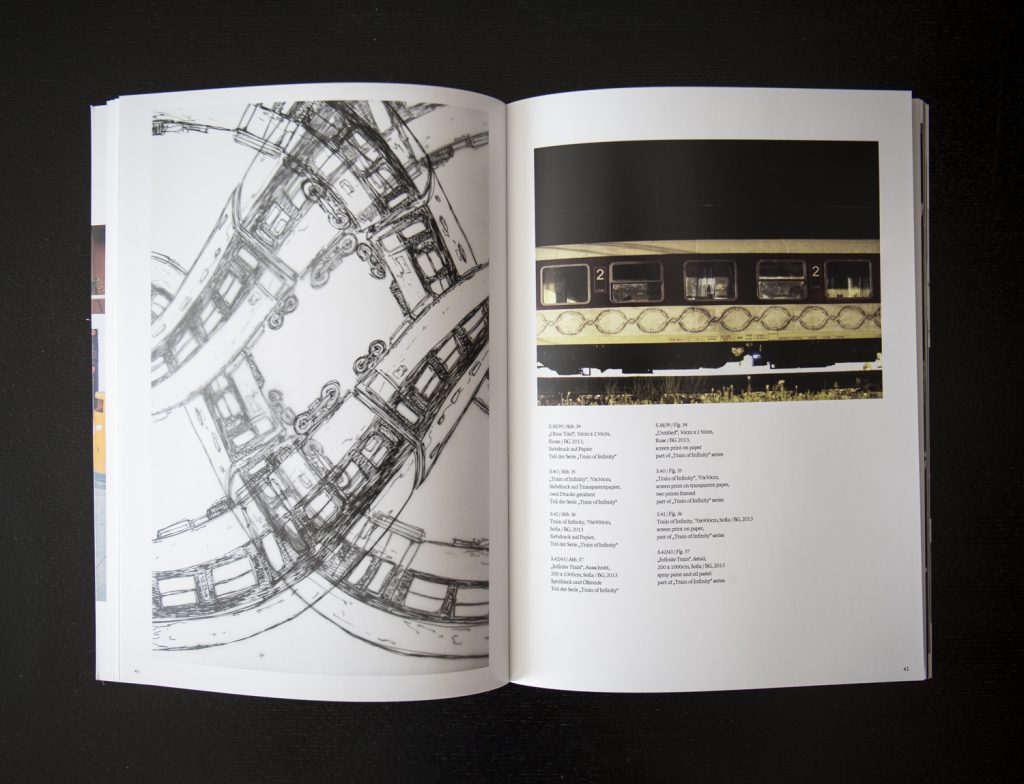 In a later chapter Robert Kaltenhäuser says Bessers exploration of train writing becomes “a never ending story” constantly repeating and referencing itself. This is the section of the book that delves into art-history. He goes on to make links to artists who have made their craft the subject of their paintings but also those who have captured trains from the beginning of the railways. Kaltenhäuser argues that while the train has become the surface for the painting, rather than the topic, the romanticisation of it remains the same. Javier Abarca also discusses the constant allusions to train writing within Bessers art. An unusual example is the use of an angle grinder which is seen as a reference to its practical use to access modern train yards. In another painting a not-too-distant future is imagined in which both graffers and the police deploy an army of drones onto the railways.

Aside from graffiti culture another significant feature of Bessers work is muralism. The earlier description of Besser as a muralist is particularly relevant as he was educated at the Academy of Fine Arts in Dresden. It was here during the communist GDR that muralism was taught as a subject. However after the fall of the Berlin Wall the subject was taken off the curriculum. In part this was an idealogical rejection of the socialist murals that had been produced in public space but it was also a political move to replace GDR professors. Besser was lucky enough to meet Rudolf Sitte, a veteran teacher of muralism in Dresden, who also introduced him to Mexican Muralism. So the legacy of socialist muralism has had a noticeable effect on Besser’s work although not expressed through scenes of collectivism. Referring to himself as an ‘activist’ Besser says he wants to avoid clear political messages. Rivasi calls Besser a “cultural agitator” and contrasts his work with the banal politics of Banksy. However his murals do have political resonance because they contest the use of public space. The socialist murals of the GDR have been replaced by visions of neo-liberalism. Public space is saturated with relentless advertising to the architecture that projects the dominant ideology. While graffiti has been an excuse for draconian control of public space (ie; Broken Windows policing) street-art has been co-opted as just another commodity. On its website the World Trade Gallery in New York, which touts itself as specialists in the street art scene, states it’s dedicated to “continually servicing the needs of Wall Street corporations”. This is far removed from Besser who maintains that “street-art in its original meaning – illegally done in the streets – cannot be institutionalised.” 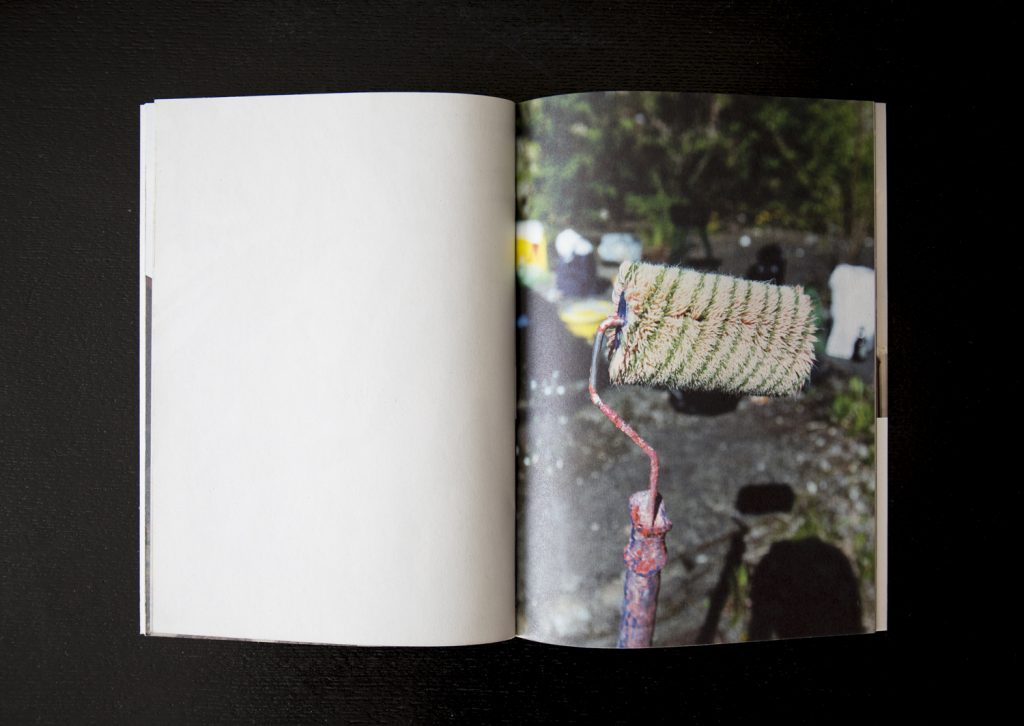 Besser often emphasises the importance of collaboration so it’s fitting that alongside his solo book there is also a BWNC crew zine released. Made up of four members the crew was formed in prison although, almost as a parody, this was while the founders were participating in an art project there. Unfortunately, while they were supplied with plenty of caps, the paint for the project failed to materialise so the group were left drinking beer while they waited. Hence the crews name; Beer Waiting Needle Caps! For the members the crew is a chance to share ideas, techniques, and collaborate in new ways. This zine came out as part of a group show they held in Dresden last year. Each member has a couple of paragraphs about their motivation alongside some nice flicks of derelict buildings, trains, and the odd framed picture.

Both these publications are really nicely produced and have a more personal focus than Bessers previous books. Amongst all the nice photos in Trains, Travels, Murals are well written articles that represent the work well. There’s a lot of interesting content from the chalked up train, the intricate line details in the murals, and the constant references to graffiti culture and its intangible heritage. Meanwhile the BWNC zine complements the book nicely. As Duchamp had century ago, Rivasi boldly predicts that Besser will have a decisive impact calling him a “pillar of urban art.” Time will tell.