by T_C
No Comments on The Faith in Graffiti 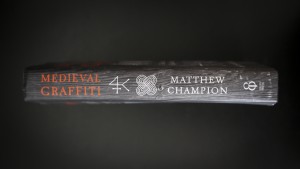 It used to annoy me on the few occasions when I picked up a coffee-table book on graffiti and the introduction would waffle on about the history of it stretching from the present all the way back to cave paintings done by neanderthals. That stuff just isn’t proper graffiti! – real graffiti is a recent thing I thought. However a couple of years ago I read a book called Graffiti and the Writing Arts of Early Modern England by Juliet Fleming that changed my view. The book describes how graffiti covered the place in the sixteenth-century and could be done by anyone and everyone. Contemporary graffiti forms a distinct subculture which often regards itself as a modern art movement yet graffiti done in the past was also created in specific contexts and had a cultural function too. Flemings book also got me wondering about wether methods of studying historical graffiti can be used to interpret modern graffiti or vice versa. This is why I went for Matthew Champions book on a similar topic. Medieval Graffiti looks at graffiti done during the Medieval period on churches in England. Nowadays churches are out of bounds for people doing graffiti but back then the church was a canvas for all sorts of writing. Champion studies this type of graffiti in his book which is divided into twenty-one chapters that each focus on the different varieties commonly found in Medieval churches. This includes written letters, crosses, ships, coats of arms, animals, demons and much more. As there’s a lot covered in the book I’ll just briefly outline a couple of the chapters and then discuss how it can relate to contemporary graffiti.

The first type of graffiti discussed in the book is ritualistic graffiti. These include compass drawn circular designs, pentangles and ‘VV’ signs. Each of these symbols is described and explained with the author putting forward his theories on them. Some of this is about the practical side of making graffiti: who did the graffiti and how? The circular designs, for instance, were originally thought to have been done by masons with their compasses but 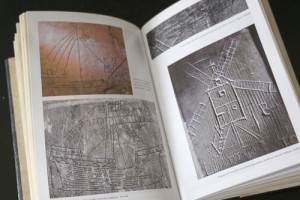 Champion argues that many were actually created by women using the shears they commonly carried with them. Elsewhere he discusses the meanings of ritualistic graffiti. Surprisingly the pentangle is a common type of graffiti found in churches. In the Medieval period the pentangle wasn’t associated with witchcraft but was a Christian protection mark. As graffiti it was laid over images of demons to contain evil or put next to other images to protect from evil.

One of the chapters that I found most interesting was on graffiti that acted as charms or curses. The chapter describes graffiti that are magical. What is great about it is that this graffiti reveals how differently people thought about the world around them. From a modern perspective magic is not something that would really be associated with the church. In Medieval England people were tried for being ‘witches’ but often where faith ended and witchcraft began was actually hard to distinguish. Some graffiti in churches was written to protect against evil or cure illness. Other graffiti that has been found are more sinister and were designed to be curses. However rather than representing some hidden evil in reality this sort of graffiti reflected the mainstream outlook of the church which often publicly laid curses on people.

The graffiti discussed in the book demonstrates a different way of reading the past but I think Champion misses an opportunity to engage with modern graffiti and potentially explore his subject in a different light. At the beginning of the book Champion discusses the lack of literature and research on his subject. It could have been an innovative approach then to use research on modern graffiti. Annoyingly however Champion only mentions contemporary graffiti in order to 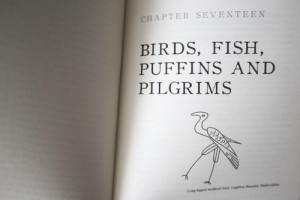 disassociate his subject from it. In contrast to the interesting conclusions he makes about Medieval graffiti he falls back on a lazy analysis of the modern equivalent as “the random doodling of an alienated generation” or merely just “meaningless”.

Despite the above criticism overall I found the book accessible and easy to read. It’s not just an interesting look at graffiti but it also opens up a fascinating insight into the medieval world. The book got me thinking about comparisons between graffiti done then and now. For example, in contrast to the period Champion studies, graffing on churches is now taboo; what does this say about changes in both the uses of graffiti and churches? Another example is the pentangle which, similar to graffiti in Medieval churches, is a frequently used symbol in graffiti pieces nowadays; how has the use and meaning of this sign changed? The start of an answer to such questions can actually be found in the final section of the book. Champion describes how the Reformation changed church graffiti into something more familiar to the modern eye. He suggests the church became just another surface to write on rather than a place to physically interact with God. More importantly writing graffiti changed from a religious act into a secular one. Overall I think the book highlights the constant cultural references that are contained in graffiti. Although they may be fairly casual to the person who has written them, to the reader graffiti can say a lot. And that applies just as much to graffiti made in the past as it does to graffiti done in the present. 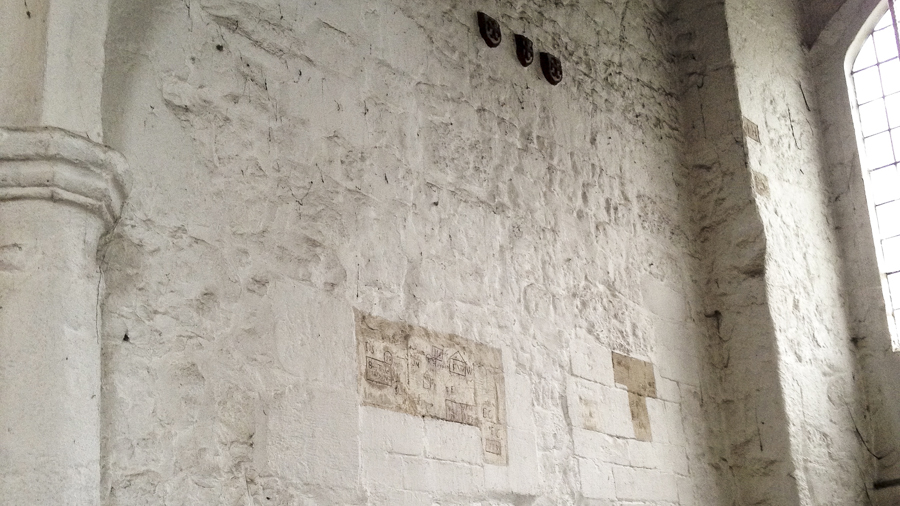 Finally I thought I’d go and see if there was any graffiti to be found in a church near me. So I went down to St Nicholas church in Deptford and was pleased to find some post-reformation graffiti that has been preserved halfway up a wall!