by T_C
No Comments on Introducing the Iconosphere

This article is a bit off topic as it’s not really about graffiti and it’s not a review of a graffiti publication either. It’s actually a football fanzine called Stand. The publication is usually an 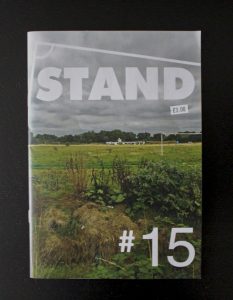 interesting read, which isn’t dominated by all things premier league, and is about as close to an ‘ultras’ stance as you can find in the UK.

In issue fifteen an article by Jonathan Turton about urban goals caught my eye. Although it’s only a short piece it’s something that I’ve occasionally thought about. Every so often I’ll walk past a goal painted on a wall and wonder about how a simple stripe of emulsion can signify the way society has changed. Turton says “their fading paint reflects the dislocation of football from the working class neighbourhoods you’ll find them in”. Those white lines aren’t just a disused old goal they represent a change in social habits, culture, wealth, and how the urban environment is used. However by remaining they continue to make up the ‘iconosphere’ and so affect how we view our environment. Iconosphere is a useful term I’ve come across that is used by Ella Chmielewska to describe the visual experience of the city. The design of a street name sign, flyposters, a goal on a wall and obviously graffiti; these are all signs that shape how we think about and interact with the place we live in. 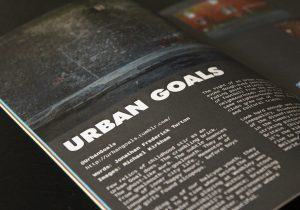 Aside from the goalposts piece there’s plenty of engaging stuff in this issue of Stand. There’s a good article about footballs response to the refugee crisis and elsewhere the outrageous ticket prices for fans in England is attacked. One particular article that I think links to graffiti is about the defence of free speech. Stuart Waiton discusses the ‘Offensive Behaviour at Football Act’ in Scotland. He believes that this is one of many cases where football is used as an “authoritarian laboratory”. Essentially the gist of his argument is that the state has been able to introduce a new draconian law that it’s justified through its use on a maligned social group, in this case football fans, but the danger is its use will be extended and become normalised. Graffiti writers in the UK, and elsewhere, face a similar situation in this regard as there are several laws aimed specifically at them. One example is the ‘Conspiracy to Commit Criminal Damage Act’ that has been used to send people to prison with long sentences. Waiton suggests that this sort of authoritarianism is often driven by “so called liberals”. However the use of the term ‘liberal’ is almost clichéd and I think that such examples are actually part of a wider and more fundamental process of state control.

Anyway if you’re interested in football then Stand is worth checking out and the odd graffiti-related article is always a bonus!