by T_C
No Comments on Illicit Activity 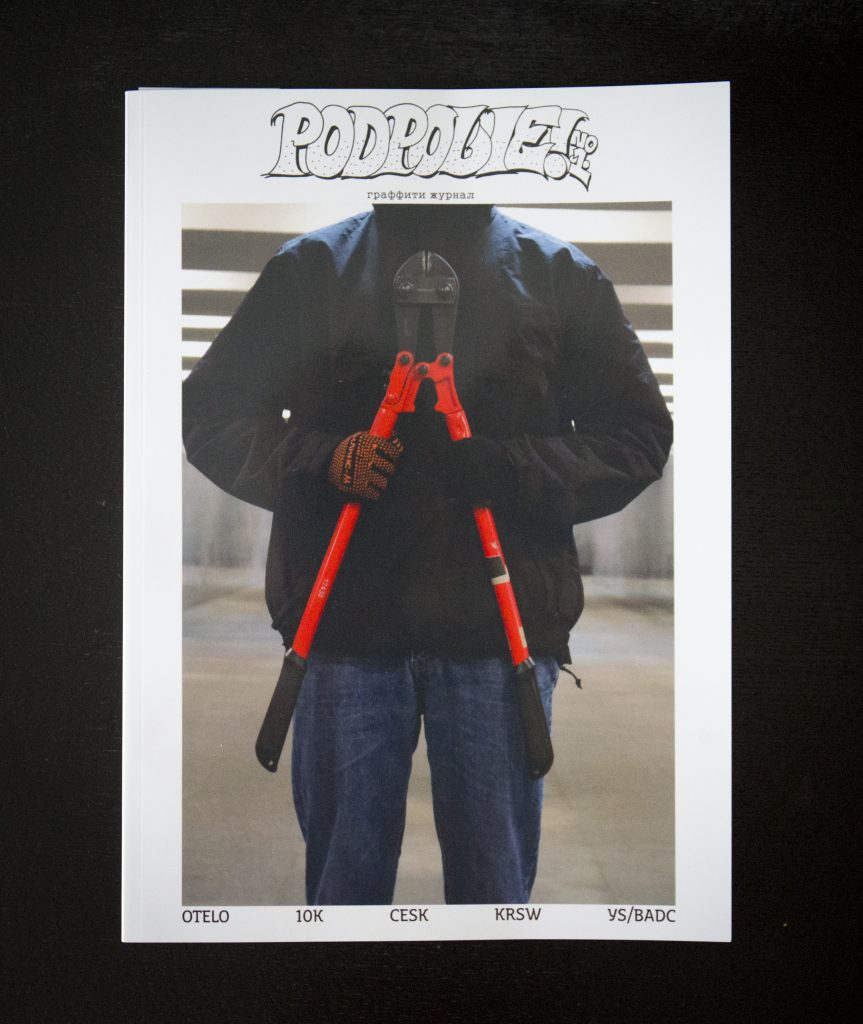 Belarus is the European anomaly that the rest of the continent views as its ‘last dictatorship’. Although it’s recently been in the news most people, including myself, know next to nothing about this country and its culture. So it’s interesting to come across a new magazine that attempts to remedy this. Podpolie, which roughly translates as ‘illicit activity’, is the first and only publication to focus on the scene in this far-flung part of Eastern Europe. 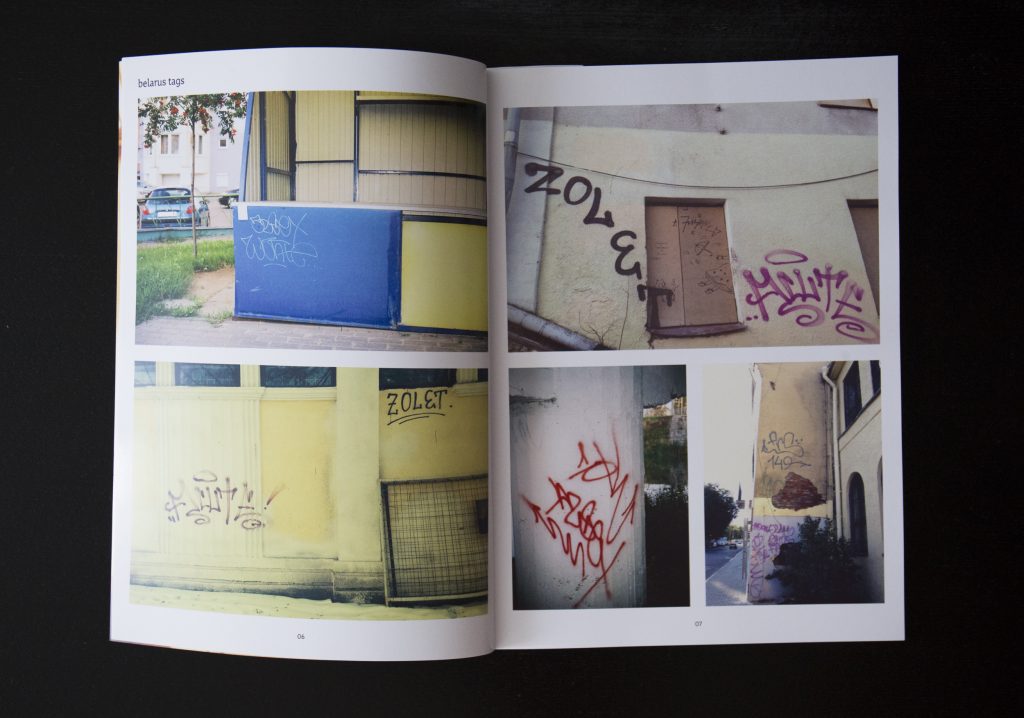 The mags editor tells me that the scene in Belarus is small with only about twenty active writers. Meanwhile “it’s very dangerous because there are a lot of cops so it’s a big deal to go out bombing on the streets.” However activists in Belarus can take advantage of the sort of Soviet style architecture that really suits graffiti. In fact the magazines introduction sets out the intention to present quality graff and “how it fits into local architecture.” In contrast to the vast amount of information on the internet Podpolie aims to be a filter that contextualises the graffiti it presents. The magazine, split across nine sections, does also include a bit of stuff from abroad and helpfully provides an English translation of the texts.

The opening page has a great shot of a crumbling road running through some flats while in the foreground stands a plastic barrier with a couple of tags on it. At first glance the picture might seem a bit mundane but actually it really gives an idea of the landscape where the graff is. This continues right through the magazine with images of graff on crumbling tenements, housing estates with the occasional abstract Soviet mural, tiled walls, and even wooden houses. Blocks of flats are almost the obligatory background although some of the older buildings look quite provincial. The streets of Minsk, Pinsk, Brest, and Vitebsk are covered in three chapters of tags, streets, rooftops, and tracksides. These are accompanied by a few sections showing commuter trains and a special on 10K crew. The odd freight pops up too with a cool shot of some tropical themed graff on a grey hopper in the snow. 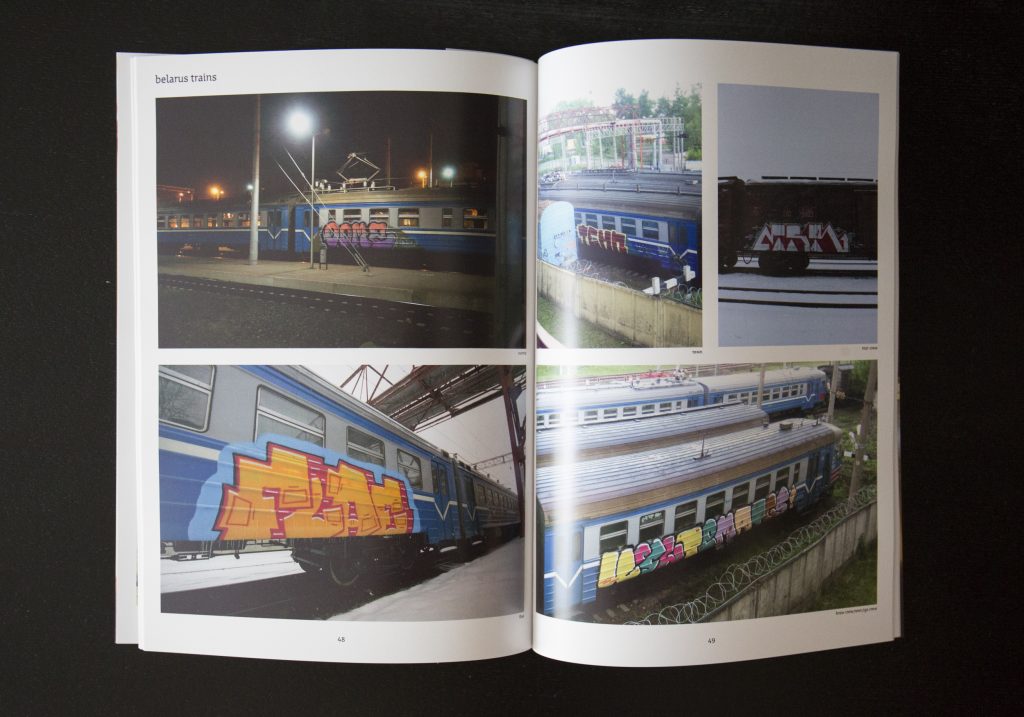 The remaining chapters are features on individuals or crews. There’s four mixed pages on Cesk and a few rooftops and walls showing KRSW crew. One nicely composed photo shows the crew painting a seawall while sunbathers lie in the foreground and a man in his swimming trunks looks on comically scratching his head in bemusement. The magazine isn’t exclusively limited to Belarus and there is a photo report with Otelo containing lots of walls in his distinctive style. Finally the magazine ends with some flicks of BADC/YS on a South-Asian tour.

As a guide to the graffiti subculture in Belarus Podpolie is pretty good. Taking up seventy-six pages the content is nicely put together and the introduction thoughtfully sets out what it aims to achieve. Apart from the intro, and a few short quotes, the magazine does lack a bit of text. Overall Podpolie is an intriguing publication that left me wanting to know more about Belarus. So it’s good to know that another issue is planned for August which will have just three articles featuring prominent vandals from the country. 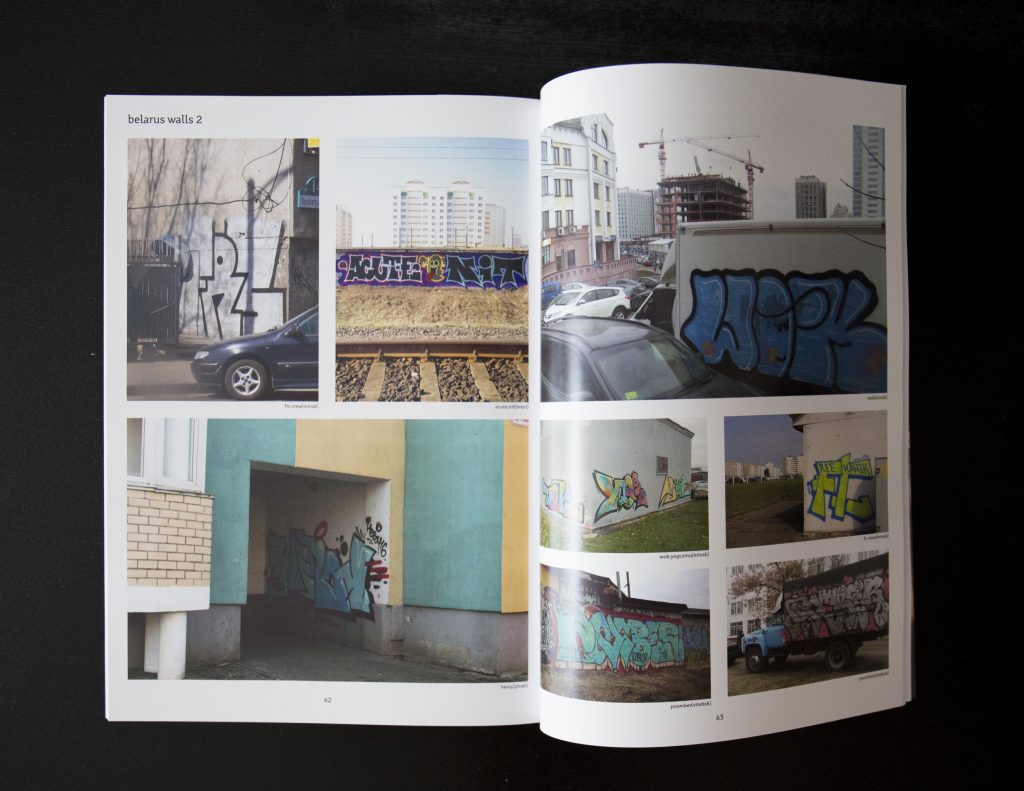 Unusually there doesn’t seem to be an Ⓐ in this mag.