From wall to paper

by T_C
No Comments on From wall to paper 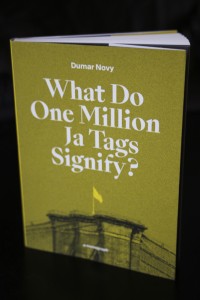 I got What Do One Million Ja Tags Signify? on a recommendation and from the title expected it to be some kind of very serious academic work. In fact it is more like graffiti meets Flann O’Brien and it’s fucking hilarious. The book, by Dumar Novy, is a monograph on the tag ‘Ja’ and the academic discipline of ‘Jaism’ that it has now spawned. I read it as a sort of parody of intellectualism that delves into race, religion, gentrification, the police, Darwinism, genocide, philosophy, capitalism and bum sex.

The first chapter is a stream of consciousness in which the author introduces the Ja tag and describes how it has become a crucial element in the dysfunctional relationship between him and his girlfriend. As their lives degenerate into a sordid sexual mess Ja is the one thing left between them. It’s pretty grim.

After the opening chapter Novy describes Ja in more detail; who/what is Ja, how Ja has evolved and changed, and what influence Ja’s had on New York and its residents. Every chapter in the book moves along at a swift pace onto often wildly different and unexpected topics. So by chapter five there’s a description of a therapy group that encourages its members to go out bombing ‘Ja’ as a remedy for their suicidal tendencies. In another chapter I found myself reading an imaginary conversation between a detective and the author about his dead father. It’s all slightly bizarre with Ja tags leading Novy into the land of the dead but at the same time it’s really funny and it had me literally laughing out loud! Llol. 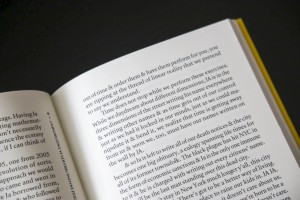 In fact I was chuckling right the way through futuristic visions of New York, genocide and other topics you won’t often encounter in a book on graffiti. However in-between the humour the text is also really interesting and has something serious to say. For example each paragraph in the fourth chapter of the book is a hypothesis on what the meaning of the Ja tag is and how it can be interpreted. Throughout the book there are philosophical ideas and discussion around the politics of the state, society, racism and culture. When the author says that “viewing the world with distrust and cynicism are the conditions set for me to find something like JA’s million tag march through NYC as the most important cultural event of my lifetime…” he’s describing a feeling of dissatisfaction that resonates through the book.

I’m not sure how to describe What Do One Million Ja Tags Signify? maybe as part novel, part tongue-in-cheek philosophical thesis and part religious devotional text. I’d definitely recommend it anyway. It was really engaging and I read the book cover-to-cover in one go. The whole book is well written and can be nicely poetic too; “Graffiti writers get to be king for a day, fool for a lifetime.”