by T_C
No Comments on Adam Void Interview 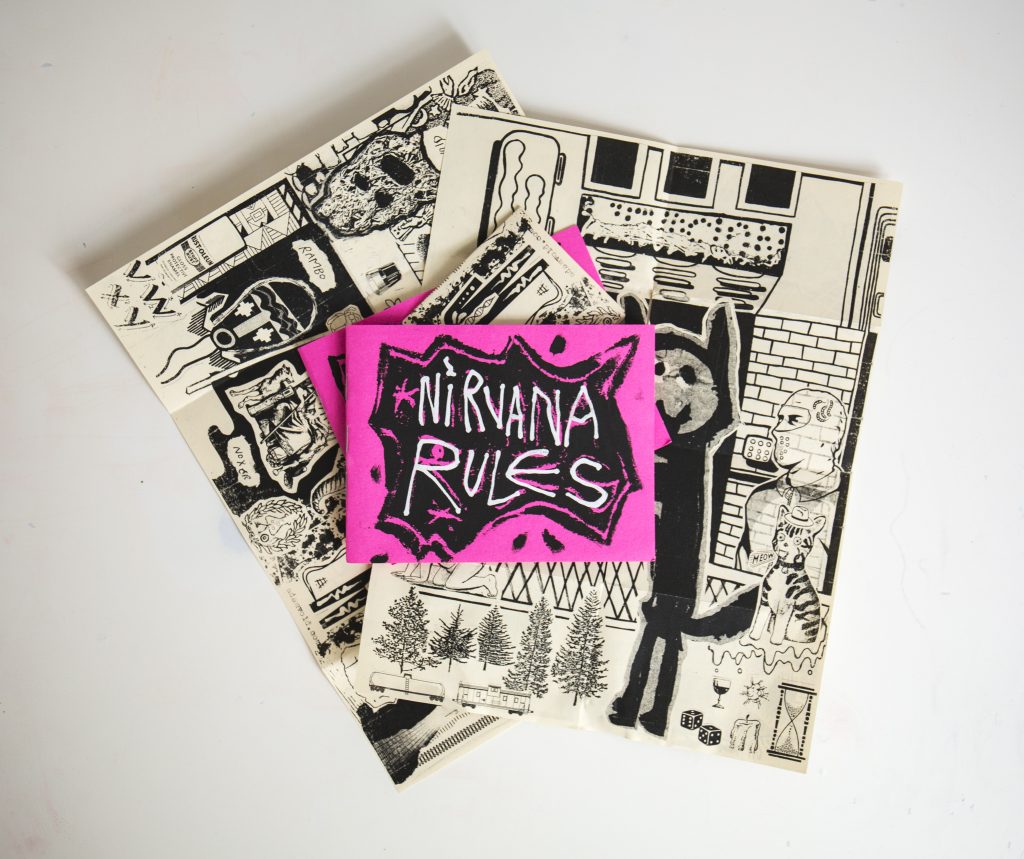 Nirvana Rules is the latest of offering from among the many zines Adam Void has made. The title gives a clue to the content within which focuses on the ‘Nirvana Rules’ tag he first noticed on the streets of Baltimore. The graffiti is unconventional, both in its form and style, yet being well-executed and repeated often this clearly isn’t just a series of spontaneous tributes left by random Nirvana fans. In the introduction to the zine Adam Void points out that it’s not unusual to see a popular band’s name on a wall. Fans of various bands eg; Kiss, Iron Maiden, or Slayer seem to enjoy slapping a bit of emulsion on brick or writing on a toilet door. However the Nirvana Rules tag appears to be unique in that it has a dual function as one person’s tag. Presented over the pages of the zine, in black and white, the tag is shown to have a clear aesthetic being placed on a variety of surfaces and mediums.

In a similar way to the Guerrillero Heroico image of Che Guevara, Nirvana have also been co-opted as an overused branding image. In that sense anyone who sees Nirvana Rules will instantly recognise it. Unlike an overstylised tag that the average member of the public wouldn’t be able to read let alone relate to. However, reclaimed from the surface of a black t-shirt and re-interpreted in a different way Nirvana Rules takes on a new form. The final pages of the zine contain an interview with the actual Nirvana Rules tagger. As a fan of the band she finds it hard to “stomach all the hype around Nirvana as a fashion statement”. Her tag came about as a rejection of graffiti conventions rather than a statement on the band’s image though. Nirvana Rules was bored with just “watching the boys paint” and wanted to join in without adhering to the self-aggrandising ‘rules’ of graff. In keeping with this intention Nirvana Rules has never produced some complicated wild style at a legal spot and remains an honest tagger.

The Nirvana Rules zine is a really nicely produced publication so I wanted to know more about the thought process behind it. Adam Void says it all started “before meeting the NGC crew, when I was trolling around the sub-layer of Baltimore, MD, I would see the words “Nirvana Rules” written too often to be civilian graffiti, but without any hip hop hand style catalog. After a few years of questioning and wondering, I finally met her through a mutual friend and knew that this writer was a very interesting anomaly. Recently, with her staying up on the streets, nooks, and crannies of Oakland, CA the relevance of “Nirvana Rules” came back to the fore bringing me to do the interview and make this zine. Esoterica nuanced into a small and limited print edition, documenting strange small writing in bathroom stalls. Also… I am hugely influenced by the band, Nirvana, their ability to inject anti-authoritarian ideas into the masses, their ripping angular noise pop, and hope to steer my graffiti and art output into what could be called a pop-revolutionary post-Nirvana practice.”

The approach of the Nirvana Rules zine combines “mystery, intrigue, images taken from internet search engines, urging the reader to make more complex statements on the streets; even if it’s just the name of their favorite band. “Nirvana Rules” is an abstracted thesis on what happens to graffiti 25+ years after the underground became pop. Not as overtly revolutionary as Read More Books, You Go Girl, or Graffiti Against The System, “Nirvana Rules” pushes the writer (or novice with a pen and a few drinks) to think outside of the box when deciding what to write over and over and over again.”

Nirvana Rules links graffiti with another musical genre outside of the standard hip-hop association. Adam Void points out that whilst “graffiti was definitely popularized as an appendage of hip hop, it has also found a home with go-go, punk, metal, reggae,and skate thrash, and the subcultures of freight hoppers, truck stop bathroom meetups, and rural outcasts. I’m particularly interested in the non-urban aspects of graffiti as a counterpoint to the commonplace term “urban art”. Having lived in New York for five years and being blessed to meet and mentor under some of the pioneers of the world’s hip hop scene, I am in love with graffiti’s early days and the innovative poor man’s party that was hip hop. Those same spirits of poverty, necessity. and urgency color the other musical and cultural subgenres previously mentioned. Do-It-Yourself culture is the common element (present with zines as well).” 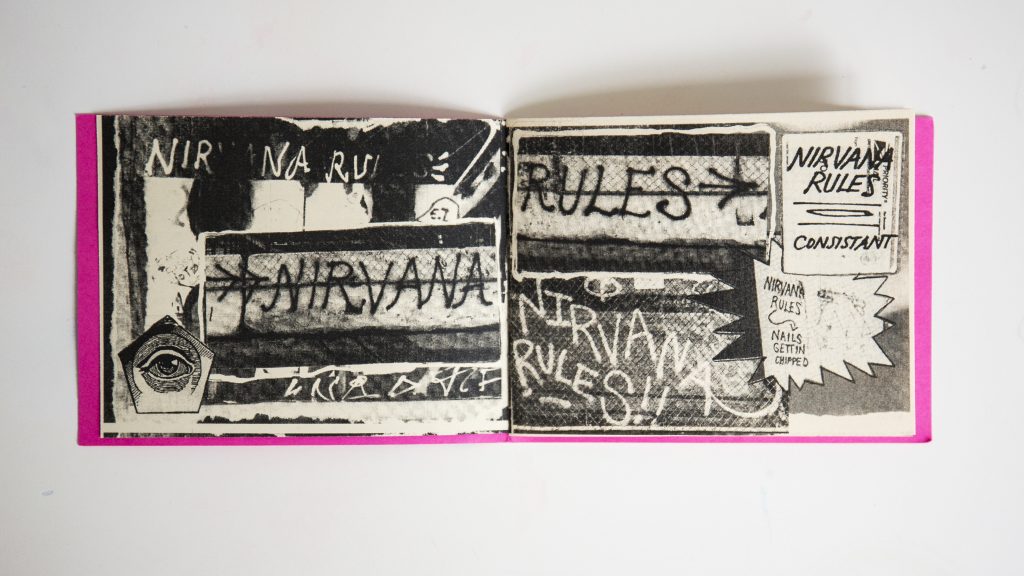 This view of how graffiti intertwines with other sub-cultures goes right back to the beginning. His “background in graffiti and zines both started off as similar extensions of the same impulse. Punk rock and general mischief were a big part of my teenaged life in the rural suburbs outside of the conservative capitol Columbia, SC. I got my hands on the anarchist zines and punk fanzines during the late 90’s hardcore Vets Hall and warehouse space days that moved me to make my first zine in 1999. I’ve been doing the graffiti since around the same time as the zine impulse. While posting bills for our high school punk band, my bandmates would spray paint ETC (my brother) and FAG (an out and proud homosexual). Tagging along, I picked up the paint too and after a few months found the word AVOID. I like zines for their political power of free, one-to-one communication, and their equal ability to say explicit non-censored ideas or abstract pure-art packages. I’m still refining my personal voice in both graffiti and zines, and plan on distilling the flavor to a potent and unique punch.”

Not confining the DIY graffiti ethic to one part of his life Adam Void has transferred his skills into other projects. One of these is the experimental School of the Alternative which “began around 2015 as a Do-It-Yourself, collectively operated, contemporary alternative to traditional art education. Based on the original campus of Black Mountain College, we gather 100+ artists, thinkers, musicians, and weirdos for a month to teach, learn, and work together.” 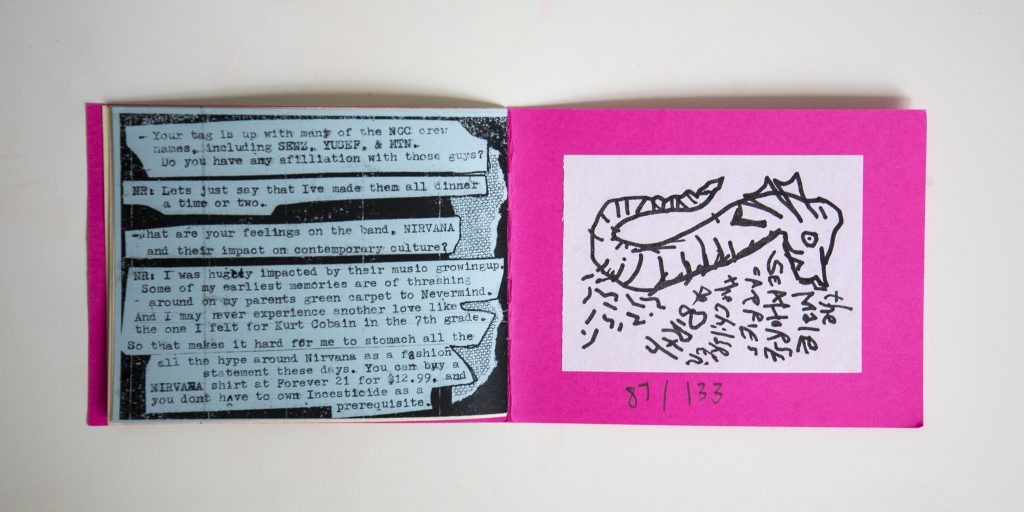 Meanwhile next in the pipeline is a zine about his “personal experience at Woodstock 99 that will be released next year. It analyses the cultural significance of the “failed” corporate mega-concert turned white riot twenty years later. Also have all the notes, photos, and ephemera from a week-long graffiti road trip with my Dad and three dogs through both coasts of Florida and the Keys. Burnt Bra Press out of Oakland, CA is releasing a full color photo zine of Polaroid documentation from my assorted freight hopping adventures. And I’m still trying to get my new freight travel zine Misadventures and Musings from the Train Brain out into the general public.”

So there’s plenty to keep an eye out for!