by T_C
No Comments on A Subcultural Travel Guide 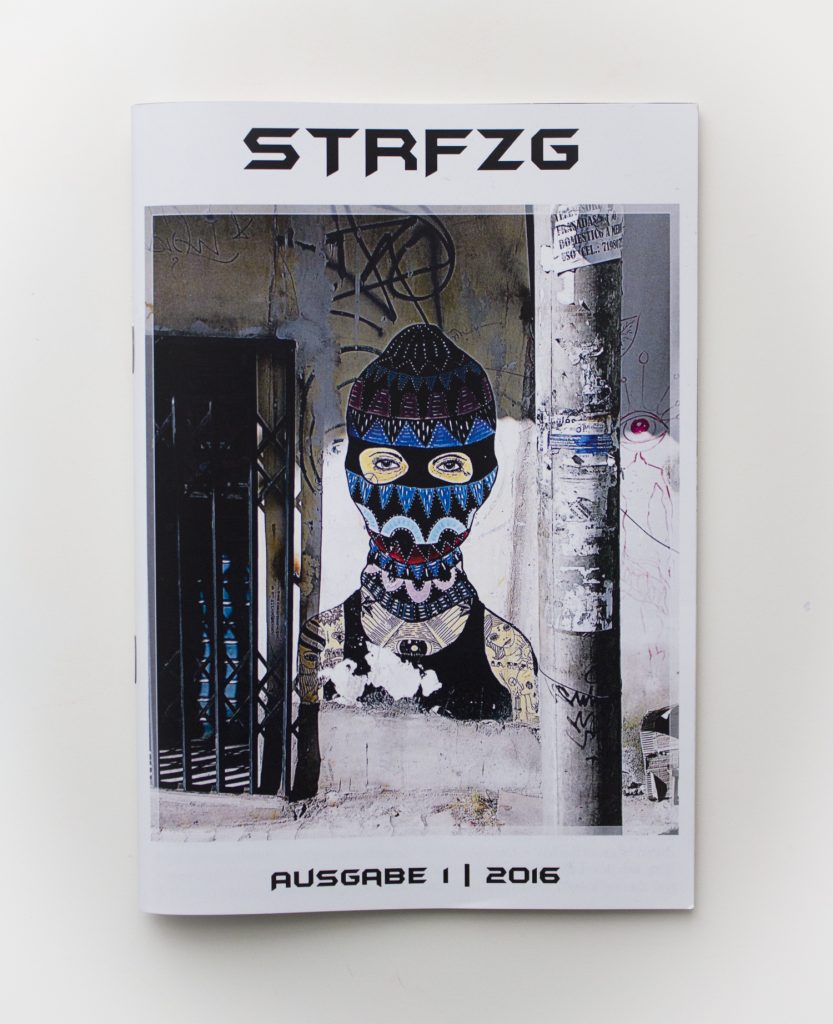 This is something I’m quite excited to see – a magazine that combines graff and footy! There are occasional bits of football graffiti to be found in various magazines and I’ve seen a couple of special street-art editions of ultras magazines too. However, while I was hoping for an in-depth look at football graffiti, Strfzg doesn’t quite do this. Rather than documenting football related graff, the zine is more like the personal travelogue of an FC Augsburg supporter. As they don’t play too much international football the magazine also highlights various other clubs in the countries that the author has passed through. The introduction describes Strfzg as a fanzine and travel book with some graffiti chucked in.

The name of the zine is a play on the the German word for ‘a foray’. The forays here are laid out into sections that cover either football or graffiti subculture from different cities around Europe, Australia, South America and Southeast Asia. For example one, ten page section, starts with a short description of graffiti in Thailand and Malaysia. There is a new and lively graffiti scene there which is boosted by (some well known) graffiti tourists who have also left their mark. The following pages show photos from Chiang Mai, Bangkok and Kuala Lumpur. Elsewhere in the zine other cities covered include Amsterdam, Melbourne, Prague and Christchurch.

Towards the end of the publication there is a section about the state of graff in Augsburg. The author describes increasing interference by the authorities although remains optimistic that graffiti will continue. A few of the city’s more prolific activists are mentioned alongside pictures of their work. Attention is also drawn to new works by Legio Augusta who are an ultras group from FC Augsburg. This section’s quite interesting as this sort of graffiti is unusual in England. The ultras style of support is only just emerging in the UK and while a few groups are slapping up a load of stickers, apart from the odd oldschool paintbrush and emulsion type of daub, there’s not much football graff. Legio Augusta’s stuff are bold, nicely executed pieces, in the clubs colours. The editor of Strfzg explained the dynamic between the Augsburg ultras and local graffers a bit further to me. Initially some of their work was taken out but as they’ve became more sophisticated the ultras have been accommodated, although they still exist in parallel to the graffiti scene. Over motorways and along tracksides Legio Augusta’s graffiti serves to show where the town’s loyalties lie both to visiting supporters and of course any local gloryhunters tempted by Bayern. Beyond that the author says it functions as an expression of “freedom in comparison to all of the repression you gain if you are a member of an Ultra crew. In some way you can take ‘revenge’ on the cops for treating you like a criminal every weekend.”

While the majority of the photographs in Strfzg are of graffiti most of the texts focus on football. This begins with an article about FC Augsburg’s recent stint in the Europa league. There’s a description of an poignant game, when they hosted Partizan Belgrade, in which two tragically deceased fans were remembered as well as their injured friend. Strfzg‘s author also followed the team away to Athletic Bilbao and AZ Alkmaar – which sounds like a particularly fun trip. Later in the zine there’s a bit of groundhopping around Asia and some matches in Australia. The one segment of Strfzg that’s in English is an interview with the Silver State Ultras from Perak in Malaysia. They talk a bit about the supporter experience there, how they organise their group, and conflicts with the authorities. Some trends are recognisable such as the general sanitisation of atmosphere or the sort of imitation of American football that results in club rebranding and silly mascots. The Silver State Ultras are surprisingly unconcerned by the rebranding of their club though and emphasise that the club is the same. Alongside the interview are some nice shots of the fans in action and the ground where the team plays. 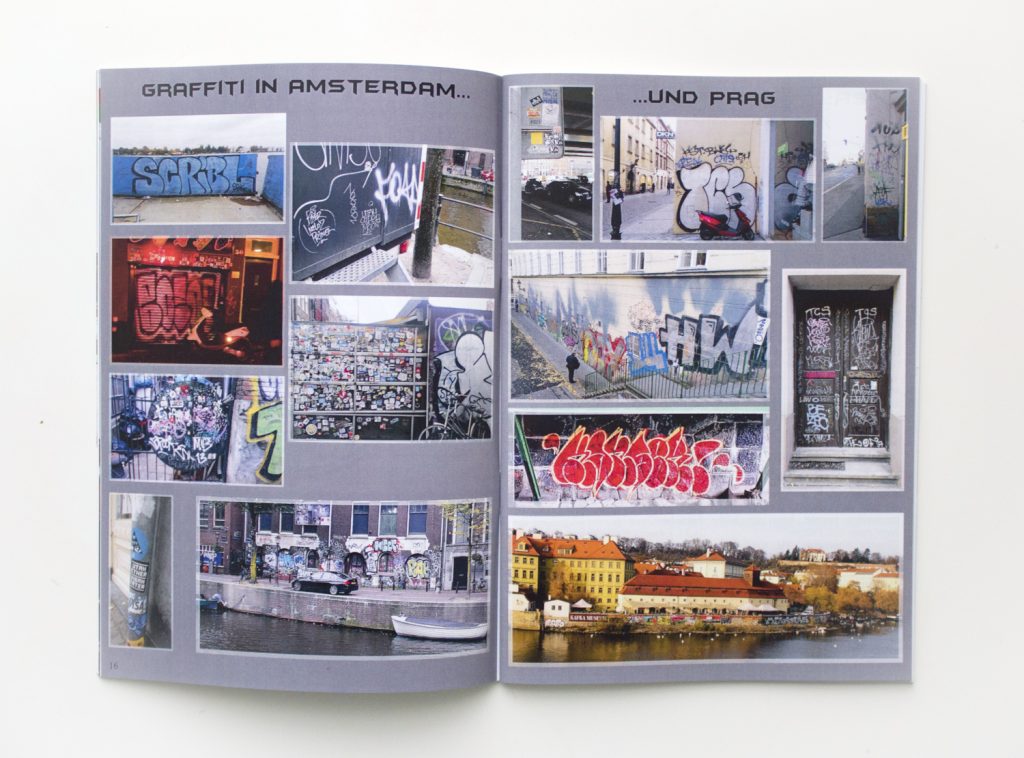 Another match report is of the Sydney derby in Australia. This derby doesn’t have much history to it as the clubs involved are only a few years old and so they’ve only played a handful of times. In fact the whole ‘league‘ is contrived and so it seems surprising that the clubs that play in it can evoke much passion. The article begins by pointing out that there is a history of animosity between the two areas of Sydney that the teams represent. Basically though it’s the ultras who have created the atmosphere at the games. The author goes in the Western Sydney Wanderers end after following the march by the home fans to the ground. During the match there’s a few displays and it sounds like a half-decent, noisy crowd. The narrator gets wrapped up in the atmosphere and it’s obviously an enjoyable enough derby.

Overall Strfzg is a nice zine and at nearly 80 pages has a decent amount of content. Aside from the Legio Augusta flicks the graffiti and football are documented alongside each other as two different subcultures. This representation is a bit of an odd mix but even for the casual reader it’s still an interesting read. There’s a couple of drawbacks in that some of the images were a bit small and there’s no translations from the German. However Strfzg is an unusual concept that is engaging and, as a second issue is on it’s way, will be worth keeping up with. Finally the sole advert in the zine is worth a mention as it is the first time I’ve come across one for a lawyers in a graff publication! 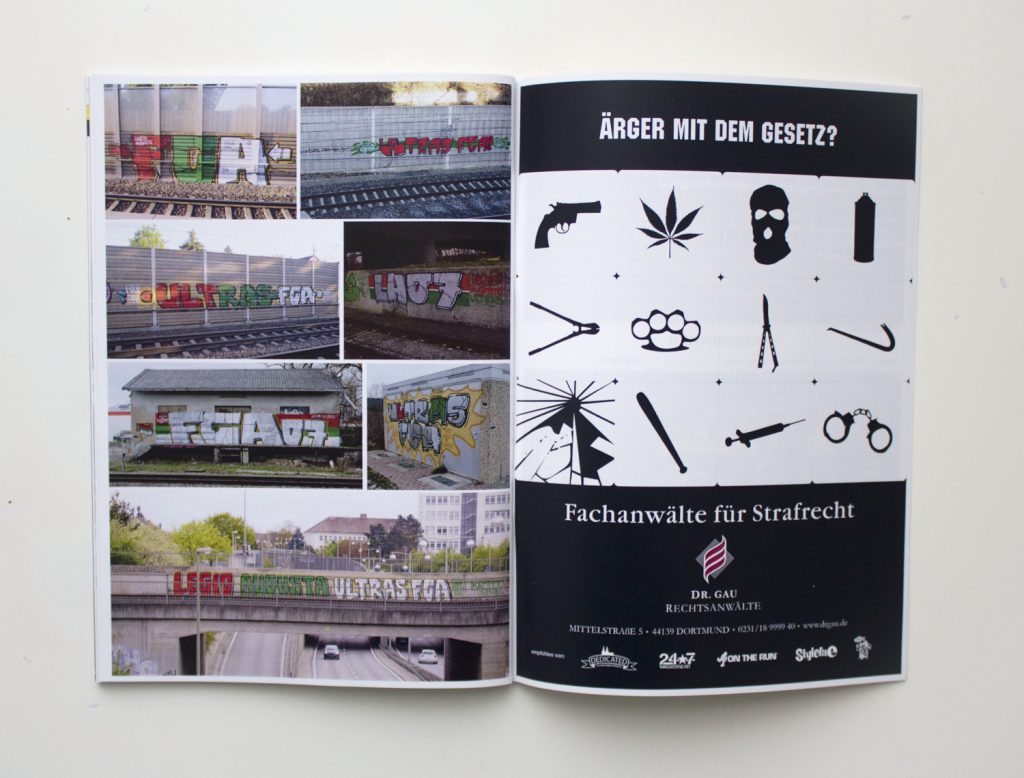