by T_C
No Comments on A brief look at Nottingham 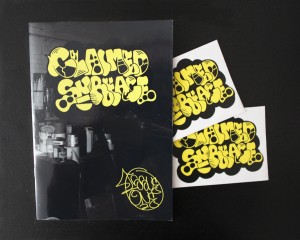 Issue one of, the nicely named, Claimed Surface is only a small twenty-eight page zine but it offers a nifty snapshot of graffiti in Nottingham. I like the idea of publications that have a specific city or regional focus and that’s what attracted me to this one. There is a short intro page that sets out Claimed Surface as a fairly low key one-man production. When I looked through I was pleased to find most of the photo’s were printed in full colour. To start off there’s some tags and throwups, then there’s chrome and colour pieces on various walls, a spread of sketches, and finally some black and white action. For what it is I’d say Claimed Surface is pretty good. The quality of the pictures isn’t bad and the production looks fairly proffessional so I’ll look out for the next issue!